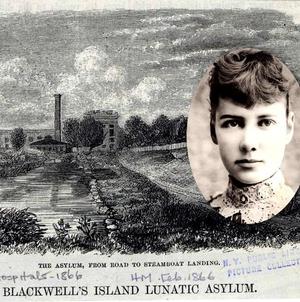 December 10, 2021, is the opening date for The Girl Puzzle monument on Roosevelt Island, which honors investigative journalist and activist Nellie Bly (1864 - 1922), and pays respect to the women who once suffered in the island’s lunatic asylum. New York City Council Member Ben Kallos allocated $70,000 to make the monument accessible to those in the disability community and more interactive for all. Learn more at The Washington Post's Lily.

Note: The monument by sculptor/designer Amanda Matthews, takes its name from one of Nelly Bly’s first articles, “The Girl Puzzle,” which revealed how divorce affected women and proposed reforms to divorce laws.  Learn about the monument at thegirlpuzzle.com.

Learn more about Nellie Bly, and her experience at Bellevue Hospital in our neighborhood:

Elizabeth Cochran, better known by her pen name, Nellie Bly (1864 - 1922), was one of the first woman journalists, gaining celebrity through undercover investigative journalism. She got her start in Pittsburgh at the Pittsburgh Dispatch, writing about factory conditions for women and the need for expansion of “the woman’s sphere” beyond the home, especially for women who were responsible for providing for their families. Factory owners threatened to pull their advertising dollars from the newspaper if she continued to write stories critical of factory conditions, and she got reassigned to write puff pieces in the women’s pages. Dissatisfied with writing for the women’s pages, she got an assignment in Mexico as the newspaper’s foreign correspondent, but had to flee after she criticized the Mexican government for imprisoning a journalist and was threatened with imprisonment herself. She returned to Pittsburgh, but was again assigned to the women’s pages. She believed that the only place where she could do serious writing was New York City. In the spring of 1887, she quit her job at the Pittsburgh Dispatch, leaving a note on her editor's desk: "Dear Q.O., I'm off for New York. Look out for me. BLY.”

Her first four months looking for a journalism job in New York City were difficult, with many rejections, due to being female. She survived by freelancing for the Pittsburgh Dispatch from New York. Her luck changed when she met Joseph Pulitzer, owner of the New York World. He promoted sensational investigative journalism and was willing to hire young women, popularly called “stunt girls.” Her first assignment was to get herself committed to one of the asylums for the insane in New York, so that she could witness the conditions and treatment of the patients and write a first-hand account of them.

To get herself committed, she took a room in an East Village boarding house, and imitated insane women. The matron of the house called the police, who escorted Bly to the Essex Market Police Courtroom, where a judge named Duffy had her examined by a couple of doctors and pronounced her insane. He ordered her to the insane ward at Bellevue Hospital, the city’s largest charitable hospital, where they confirmed her insanity. A few days later, she was put on an East River ferry filled with women being taken to the New York City Lunatic Asylum on Blackwell’s Island (now called Roosevelt Island). Although the women were put in the asylum to be cured, once committed, few of them ever left the asylum.

After a few days in the asylum, Bly stopped her crazy behavior and presented herself as being mentally fit. Her efforts to be acknowledged by the asylum’s authorities as sane were unsuccessful, until the New York World sent an attorney to arrange for her release. Two days later, on Sunday, October 9, 1887, the World ran the first installment of her story, and Bly became an overnight celebrity. The series was called Ten Days in a Madhouse.

Bly exposed the dire conditions at the asylum, in which 16 doctors cared for 1,600 inmates, and the treatments were abusive, ranging from mandatory cold baths to confinement in small, damp, vermin-infested, locked rooms. She also reported on the cultural insensitivity and language barriers experienced by immigrant women who spoke little or no English.

Nelly Bly’s reporting led to reforms. New York City appropriated more money for the care of the mentally ill on Blackwell’s Island, and a grand jury was impaneled to investigate the abuses and poor treatment at the asylum. It took only a month after her articles were published to gain improvements for many of the problems she exposed. Better living and sanitation conditions were put in place, more nourishing meals were provided, translators were hired for non-English speaking inmates, and the most abusive nurses and physicians were replaced.

Bly had one journalistic triumph after another, including an attention-getting trip around the world in 72 days in 1889-1890. She traveled mostly alone, on all types of transportation, sending daily updates to the New York World. The journey was inspired by Jules Verne’s Around the World in 80 Days, and she set a world record for the fastest trip around the world.

In 1895, at age 31, Bly married the prominent 73-year-old millionaire New Yorker, Robert Seaman, who owned the Iron Clad Manufacturing Company, which made metal containers, boilers, and cookware. They lived in his home on West 37th Street in New York City after their marriage, and she took the name Elizabeth Cochrane Seaman. When her husband died in 1904, she became president of the company. She was inventive, taking out two patents for new types of metal containers, and she provided generous employee benefits. But a factory manager embezzled funds and destroyed the company in 1911.

She returned to journalism later in life, writing dispatches from the Eastern Front during World War I and reporting on the women’s suffrage movement, adoption and orphans.