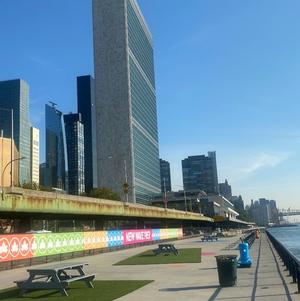 There are several ongoing public construction projects in Murray Hill and surrounding areas: the New Wave Pier makeover is completed, the Park Avenue Tunnel Restoration is nearing completion, the East Side Access Project is expected to open to the public in December 2022, and the infrastructure upgrades along 3rd and 2nd Avenue and surrounding areas is progressing, with an expected completion in Fall 2023.

New Wave Pier Completed
[shared by Community Board 6] The New Wave Pier, located along the East River Esplanade from 38th Street to 41st Street, is a New York City Parks Department project to add some amenities to the Waterside Pier and to provide additional recreational space for the neighborhood. The New Wave Pier features splashes of neon color, sections of turf, and picnic tables for the community. The New Wave Pier makeover is now complete.

The Rehabilitation of the Park Avenue Tunnel is nearing completion. The project is entering its last phase, which is the reconstruction of the pedestrian median at 34th street. This work had been scheduled earlier in the contract but was delayed due to the pandemic, material shortages and the redesign of certain elements associated with underground utilities.

Coordination with city agencies is in progress and the work to replace the existing water main will begin as the first step. This will involve the installation of a fire hydrant and shutoff valve at the southeast corner of Park Avenue and 34th Street. After the water main work is completed, the median will be reconstructed.

The tunnel will reopen once final testing of the carbon monoxide system is completed in coordination with FDNY. The anticipated completion date is November, 2021.

The New York City Department of Design and Construction commenced the Infrastructure Upgrades along 2nd Avenue and surrounding areas in the summer of 2018 with an anticipated completion date of fall 2023.

In July, the city contractor completed the final roadway restoration on 3rd Avenue between 32nd and 36th Street.

In July and August, work continued on steam mains on 35th Street between 2nd Avenue and the QMT Exit (weekends only).

Steam main work on 2nd Avenue and 33rd Street is expected to be completed in August. When this steam main work is completed, the city contactor will begin the excavation and installation of the new 48” trunk water main along the east side of 2nd Avenue between 32nd and 34th Street.

Steps for installation of water mains and restoration of the road surface.

The ESA site at East 37th Street has been inactive since the last report.

East Side Access is one of the largest transportation infrastructure projects currently underway in the United States. ESA will provide new, direct Long Island Rail Road service into a new concourse below Grand Central Terminal on Manhattan’s East Side, reducing commute times between Long Island and Manhattan by up to 40 minutes. The project involves work in multiple locations throughout Manhattan and Queens, and includes more than eight miles of tunneling.

East Side Access is an integral component of the MTA’s broader LIRR system expansion initiative to help reduce passenger crowding, train congestion and automobile traffic, and to provide connections with additional regional transportation options such as Metro North Railroad and New York City Transit subways. East Side Access will also reduce train and passenger congestion at New York Penn Station and its neighboring subway stations by providing an alternative destination point which will be more convenient for some passengers.

The ESA project is expected to open to the public in December 2022.