Get ready for the General Election in November! 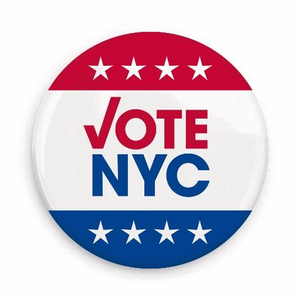 The New York State primary elections had many new features: the new ranked choice voting, the multitude of candidates for hotly contested offices, and the suspense of waiting for the final vote count. Now it’s time to start preparing for the General Election, which is less than two months away. In one way the General Election will be simpler; it will not have ranked-choice voting. But in addition to voting for Mayor, City Council Members (in some districts), Public Advocate, Comptroller, Manhattan Borough President and other elected officials, NYC voters will have the opportunity to vote “Yes” or “No” on five ballot proposals.

Military and people living or working overseas have a different process and schedule. Learn more at vote.nyc/page/military-and-overseas-voting.

Winners from the Primary Election for our districts

Below are the winners from the Primary Election. You’ll see these names on the ballot. The other seats were uncontested. Closer to November 2, you will be able to generate a sample ballot on the NYC Board of Elections website. The sample ballot will show all names that will appear on your ballot as well as the ballot proposals. The New York City Campaign Finance Board will also post a Voter Guide listing the candidates and their biographies closer to the election.

Five statewide proposals will be on the 2021 General Election ballot. These proposals, if passed, will result in amendments to the New York State Constitution. For proposed changes to the state constitution, either the voters or the legislature may initiate the process.

Do you agree with the concept of the proposal?
Do you think the law is specific enough to be implemented in a practical way?
Will the law have the intended consequences?

If the voters vote “yes”

Bills that have already gone through the Legislature would take effect after General Election. The actual date that they take effect may differ for each proposal. For example, the proposal that revises the procedure for counting population, drawing and approving Congressional and State legislative districts would first be applied in 2022.

If the voters vote “no”

If the voters vote “no” and the Legislature wants to re-introduce the bill, the process starts again from the beginning.

How are the votes counted for ballot proposals?

The ballot proposals for the 2021 General Election are summarized below. Voters will have the opportunity to vote “yes” or “no” on each proposal (or leave the item blank).

1. Amending the Apportionment and Redistricting Process

This proposed constitutional amendment would freeze the number of state senators at 63, amend the process for the counting of the state’s population, delete certain provisions that violate the United States Constitution, repeal and amend certain requirements for the appointment of the co-executive directors of the redistricting commission and amend the manner of drawing district lines for congressional and state legislative offices. Shall the proposed amendment be approved?

2. Right to Clean Air, Clean Water, and a Healthful Environment

5. Increasing the Jurisdiction of the New York City Civil Court

More information about all of the proposals is available on the New York State Board of Elections website elections.ny.gov/2021BallotProposals.html.

New York City Campaign Finance Board, the independent city agency that ensures local elections are fair, inclusive, and open. voting.nyc is a help website for voters and also a place to register to vote, request absentee ballots and get information. nyccfb.info is a website for voters, candidates, campaign financial information, and more.