By: Barbara Gieseler and Barbara Sagan 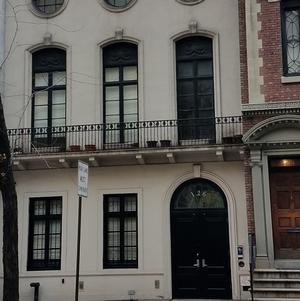 The Preservation & Design (P&D) Committee of The Murray Hill Neighborhood Association is pleased to announce that its most recent Cultural Medallion honoring the life and work of architects William Delano and Chester Aldrich was dedicated on May 26, 2021 during a virtual dedication ceremony. Barbaralee Diamonstein-Spielvogel, chair of the Historic Landmarks Preservation Center (HLPC) which sponsors the Cultural Medallion Program, presided over the ceremony.

In 1903 William Delano and Chester Aldrich established one of the leading architectural firms of the early 20th century. They moved their offices to 126 East 38th Street in 1916, and here they created more than 500 designs and alterations, including the Colony Club and Union Club in New York City and the American Embassy in Paris.

The dedication program speakers included architects Peter Pennoyer, FAIA, Melissa Del Vecchio, FAIA and John B. Murray, AIA all of whom spoke of the many and varied accomplishments of these renowned men. Francis Morrone, Professor of Architectural History at NYU’s School of Professional Studies, also participated as one of the speakers providing  historical context. The Medallion was unveiled at the conclusion of the program.

The P&D Committee would like to personally thank Lia Tolaini Banville and Banville Wines, owner of the building, for their participation in this Cultural Medallion Program. We invite everyone to visit the building to see this newest medallion.

The MHNA’s P&D Committee has collaborated for four years with The Historic Landmarks Preservation Center to install Cultural Medallions in Murray Hill. The  HLPC addresses many aspects of the built environment throughout New York City by issuing publications, as well as organizing programs and lectures on a variety of topics related to landmark preservation. The HLPC Cultural Medallion Program seeks to honor individuals who have made important contributions to the cultural heritage of New York City and is always looking for properties where notable New Yorkers once lived or worked. Funding for the research, fabrication of the medallions and the videotaping of the in-person ceremonies comes from individual sponsors, honored building owners, the MHNA and private donations.

If you would like to sponsor or contribute to the Cultural Medallion Program, make a donation on the MHNA website at murrayhillnyc.org/donate. Please contact Susan Demmet at sldemmet@gmail.com when you donate so your contribution can be properly acknowledged. Also, feel free to contact her if you know of a “significant person” who lived or worked in Murray Hill and whom you believe should be nominated for a Cultural Medallion.To learn more about the Cultural Medallion Program and to view the videotaped medallion dedication ceremonies, you are encouraged to visit the Historic Landmarks Preservation Center website at hlpcculturalmedallions.org.