And the winners of the Murray Hill Scavenger Hunt are… 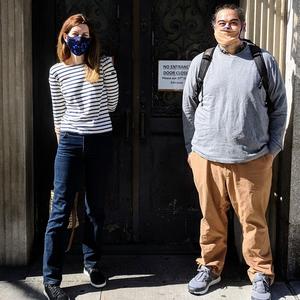 Davri Zanoeddin, a resident of East 35th Street for 15 years, did not realize how many famous New Yorkers had lived just down the street from him, and that he has the same birthday as one of them, Hume Cronyn. Melissa Cohen, a 20-year Murray Hill resident, had never given any thought to the beautiful little doorway she passed dozens of times on Park Avenue near 37th Street, the former women's entrance to the Union League Club. And the Bowdoin Carriage House bulldog was new to both of them. But they each fell in love with it.

They learned about all these things and more while participating in the Murray Hill Scavenger Hunt, a contest organized by The Murray Hill Neighborhood Association Preservation and Design Committee as a safe, fun and informative way for residents to explore the neighborhood, and perhaps, win a prize in the process. Participants had to find and then photograph 22 items in Murray Hill's richly appointed historic districts and landmarked buildings, in an area covering 33rd to 38th Streets and Third to Madison Avenues. They had the summer to do this. The committee received ten complete and correct entries, and all ten participants’ names were put into a hat. Davri and Melissa were chosen as the lucky winners.

The day Davri learned he was the first place winner also happened to be his fourth wedding anniversary.  He will now be able to use his first prize of a stay at the Shelburne Hotel & Suites by Affinia for a romantic anniversary celebration. On learning of her second place win, Melissa said that she needed some good news.  The pandemic, which resulted in the cancellation of a trip to London to celebrate her 20th wedding anniversary, has been difficult. However, she is now looking forward to a special dinner with her husband, using her prize of a $50 gift certificate to a Murray Hill restaurant of her choice.

Congratulations to Davri and Melissa, and to all who participated.

Photo (top): Melissa Cohen and Davri Zanoeddin, winners of the Murray Hill Scavenger Hunt, in front of the former women's entrance to the Union League Club.