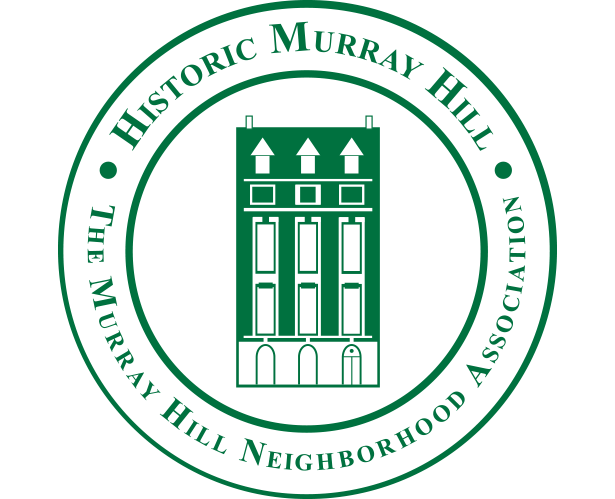 This scavenger hunt has been designed for individuals and families to get outside and learn about the history of Murray Hill! The hunt will take you from 33rd Street to 38th Street and from Third Avenue to Madison Avenue. There are 22 items to be found in this hunt and you have a month to complete it—from July 4 through August 2. We encourage you to hunt at your own pace throughout the month!

To compete for the grand prize, take a photo of each of the items (22 photos in all) and either:

First prize: one-night stay at the Shelburne Hotel & Suites by Affinia
Second prize: $50 gift certificate to a local restaurant of your choosing.

All entries will receive a t-shirt for each participant (while supplies last).

PLEASE NOTE THAT THIS IS NOT A GOOGLE OR INTERNET HUNT. IMAGES TAKEN FROM THE WEB WILL NOT BE CONSIDERED!!

In the 1750s, Robert and Mary Murray settled on land known as Inclenberg, roughly Madison to Lexington Avenues and from 33rd to 39th Streets, and built a beautiful home known as Belmont. Descendants of the Murray family lived in Murray Hill for many years and in 1847 registered "The Murray Hill Restriction" with the City of New York. This document made it illegal to build anything other than a "brick or stone dwelling" in the neighborhood, and allowed existing buildings to only be used as residences. No commercial uses of any kind were permitted. For example, tanneries, breweries, and "exhibitions of wild animals" were completely forbidden. The Restriction is one reason that Murray Hill is such a residential neighborhood. Today, over 250 homes in Murray Hill are listed on The National Register of Historic Places. The neighborhood also has two separate and distinct Historic Districts and 14 individual landmarked buildings, some of which you will learn more about in our hunt!

Created by Laurie Sexton, a member of the Preservation and Design Committee, from various sources including Exploring Manhattan's Murray Hill by Alfred Pommer and Joyce Pommer.