The ‘Better Together’ Campaign Is Launched at the MHNA Annual Meeting 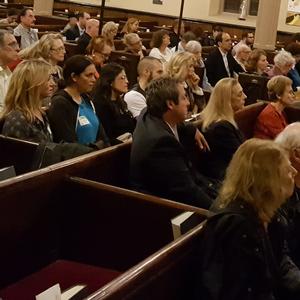 On October 3, Murray Hill Neighborhood Association members, members of the community, elected officials and representatives from government agencies came together for the MHNA’s annual meeting. The meeting was held at the Church of the Incarnation, which generously provided space for this event. The trustees were introduced by Marion Weingarten, MHNA vice president, and the Treasurer’s report was presented by Barbara Sagan, treasurer. Diane Bartow, president, summarized the annual survey and introduced the Better Together Campaign for 2020.

Better Together involves the committees of the MHNA, which will develop concepts to advance this theme. But more than that, it also involves everybody in Murray Hill who can play a part in enhancing the quality of life in the neighborhood. We all benefit when everyone in the community contributes to the well-being of the community and works together to take care of problems. To that end, the MHNA will recognize those neighbors who get involved during the year. New York City Council members Carlina Rivera and Keith Powers spoke to the group about participatory budgeting, as well as their legislative achievements and goals. Participatory budgeting enables community members to have a say in how city money is spent to improve the neighborhood; it can be used for capital projects in schools, parks, public spaces, and other places. Brian Lafferty from Manhattan Borough President Gale Brewer’s office also updated the group about issues that the MBP is working on and spoke about recycling.

Neighborhood Coordination Officers Sgt. Mike Callahan and Police Officer John Secaira from Midtown South Precinct spoke about neighborhood policing. They encouraged people to come to their Build the Block meetings which give community members a chance to raise issues of public safety as well as other concerns.

David Frank, Engineer, and Karen Flores, Community Liaison, from the 3rd Avenue (and surrounding areas) Infrastructure Replacement Project, updated us on the progress of the project and explained why the project is essential. The valves that allow sections of the water main pipes to be turned off and on are so corroded that they are not working. When this is fixed, fewer people will be inconvenienced when it is necessary to shut off a section of the pipes for repairs. These and other upgrades are needed to keep New York City functioning as a modern efficient city.

Manhattan East Community Association (MECA) president, Fred Arcaro, and committee chairs updated us on the activities of their groups and gave some tips to start off the Better Together theme. Matt Roberts, Quality of Life Committee, urged people to call 311 when they see or hear a problem that requires city assistance, such as homeless issues; Stein Berre, Greening & Cleaning Committee, suggested picking up litter; Lilli Seidman Davis and Michael-Ann Rowe, Business Networking Committee, asked everyone to patronize local businesses and nonprofits, to do business in Murray Hill and to help build partnerships; and Susan Demmet, Preservation & Design Committee, proposed additional Cultural Medallions, which provide information about significant residents of Murray Hill on plaques that are installed on the buildings where they lived. To conclude the meeting, Diane Bartow announced that 2020 will be the 60th Anniversary of The Murray Hill Neighborhood Association. She asked us all to watch for notices of special events throughout the year. The celebrations begin with the traditional lighting of the trees on Park Avenue on December 8th followed by the holiday party at 99 Park Avenue. She also thanked members for their participation, and encouraged all of us to join committees.

Following the meeting, committee chairs were available to answer questions and a light buffet supper was served. Many people at the meeting took advantage of this opportunity to meet their neighbors.