The Little Vegan Cafe That Could 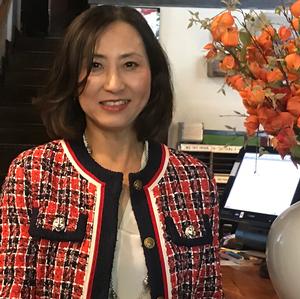 Terri and William Choi, owners of the Franchia Vegan Cafe, are on a mission: to expand New York’s appetite for meatless cuisine.

“As Paul McCartney said, if slaughterhouses had glass walls, everyone would be vegetarian,” Terri says simply.

And everyone would be eating quite well, if the menu at Franchia is any indication.

In a 1920s building with gothic touches, on a stately block of Park Avenue, near 35th, Franchia offers a type of vegan Asian-fusion fare that’s gone from offbeat to chic since the cafe opened as a tea salon in 2003. “People are more and more concerned about the environment and their health,” says Terri, who gave up meat 20 years ago and hasn’t looked back.

Also, all things Korean are now kind of trendy.

The cafe’s soju cocktails and dairy-free desserts haven’t hurt the cause. They bookend a menu of creative takes on sushi, dumplings, stir-fries and rice bowls, many featuring the latest iterations of faux meat and seafood—which happen to be made in Taiwan—in a formula that attracts up to 150 visitors a day (open only for dinner on Sundays). “The vegetarian population has been growing so much,” says Terri, “but we also have a lot of non-vegetarians who want to try it.” And who wouldn’t be curious about a Peking bun stuffed with scallions and soy “duck”?

Raised in Seoul, the couple have long shared a passion for vegetarian cuisine. In 1994 they opened HanGawi, a vegetarian-Korean spot on West 32nd Street, today a destination island in a sea of K-town barbecue.

The couple opened Franchia in Murray Hill because they could maneuver between the two locations. (Last year they made life even easier by moving into an apartment near the cafe.) After claiming the triplex space, Franchia weathered an extended period as a showcase for Korea’s traditional tea ceremony—in a city of coffee addicts.

Today Chef Jeff Fong invents vegan dishes in a kitchen above dining areas on the mezzanine and ground levels, swapping in seasonal specials as the weather turns: look for warming soups and stews this winter. Choices run from $8 to $21; the wide array of $14 lunch specials includes ramen-dumpling sets and dishes like Crisp Sweet & Sour Mushrooms with Kaffir Lime Leaves.

After the lunch crush winds down, people drift in for a pot of tea or a quiet meal served in a stone bowl under a dropped ceiling of pagoda-like open beams. High above is a dancheong, or floral pattern, dominated by green.

Down below, Terri likes to sip Franchia’s green tea, grown wild near Korea’s Mount Jilee and unfermented so the leaves retain their vibrant color. Fine green tea “should never be drunk boiling hot,” she says. “It has to be lukewarm. So part of the tea ceremony is learning patience, like a meditation process.”

As other harried locals might say, bring it on.