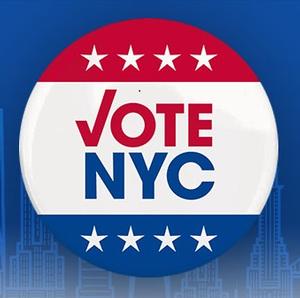 (Source: Board of Elections website www.vote.nyc.ny.us, look up your polling place and generate a sample ballot.)

Justice and Judges (may vary depending on your address):

This proposal would amend the City Charter to: Give voters the choice of ranking up to five candidates in primary and special elections for Mayor, Public Advocate, Comptroller, Borough President, and City Council beginning in January 2021. If voters still want to choose just one candidate, they can. A candidate who receives a majority of first-choice votes would win. If there is no majority winner, the last place candidate would be eliminated and any voter who had that candidate as their top choice would have their vote transferred to their next choice. This process would repeat until only two candidates remain, and the candidate with the most votes then would be the winner. This proposal would eliminate the separate run-off primary elections for Mayor, Public Advocate, and Comptroller; Extend the time period between the occurrence of a vacancy in an elected City office and when a special election must be held to fill that vacancy. Special elections would generally be held 80 days after the vacancy occurs, instead of 45 days (for Public Advocate, Comptroller, Borough Presidents, and Council Members) or 60 days (for Mayor); and Adjust the timeline of the process for drawing City Council district boundaries so that it is completed before City Council candidates start gathering petition signatures to appear on the ballot for the next primary elections. This process occurs every ten years. Shall this proposal be adopted?

This proposal would amend the City Charter to: Increase the size of the Civilian Complaint Review Board (CCRB) from 13 to 15 members by adding one member appointed by the Public Advocate and adding one member jointly appointed by the Mayor and Speaker of the Council who would serve as chair, and to provide that the Council directly appoint its CCRB members rather than designate them for the Mayor’s consideration and appointment; Require that the CCRB’s annual personnel budget be high enough to fund a CCRB employee headcount equal to 0.65% of the Police Department’s uniformed officer headcount, unless the Mayor makes a written determination that fiscal necessity requires a lower budget amount; Require that the Police Commissioner provide the CCRB with a written explanation when the Police Commissioner intends to depart or has departed from discipline recommended by the CCRB or by the Police Department Deputy (or Assistant Deputy) Commissioner for Trials; Allow the CCRB to investigate the truthfulness of any material statement that is made within the course of the CCRB’s investigation or resolution of a complaint by a police officer who is the subject of that complaint, and recommend discipline against the police officer where appropriate; and Allow the CCRB members, by a majority vote, to delegate the board’s power to issue and seek enforcement of subpoenas to compel the attendance of witnesses and the production of records for its investigations to the CCRB Executive Director. Shall this proposal be adopted?

This proposal would amend the City Charter to: Prohibit City elected officials and senior appointed officials from appearing before the agency (or, in certain cases, the branch of government) they served in for two years after they leave City service, instead of the current one year. This change would be applicable to persons who leave elected office or City employment after January 1, 2022; Change the membership of the Conflicts of Interest Board (COIB) by replacing two of the members currently appointed by the Mayor with one member appointed by the Comptroller and one member appointed by the Public Advocate; Prohibit members of the COIB from participating in campaigns for local elected office, and reduce the maximum amount of money that members can contribute in each election cycle to the amounts that candidates can receive from those doing business with the City ($400 or less, depending on the office); Require that the citywide director of the Minority- and Women-Owned Business Enterprise (M/WBE) program report directly to the Mayor and require further that such director be supported by a mayoral office of M/WBEs; and Require that the City’s Corporation Counsel, currently appointed by the Mayor, also be approved by the City Council. Shall this proposal be adopted?

This proposal would amend the City Charter to: Allow the City to use a revenue stabilization fund, or “rainy day fund,” to save money for use in future years, such as to address unexpected financial hardships. Changes to State law will also be needed for this rainy day fund to be usable; Set minimum budgets for the Public Advocate and Borough Presidents. The budget for each office would be at least as high as its Fiscal Year 2020 budget adjusted annually by the lesser of the inflation rate or the percentage change in the City’s total expense budget (excluding certain components), unless the Mayor determines that a lower budget is fiscally necessary; Require the Mayor to submit a non-property tax revenue estimate to the City Council by April 26 (instead of June 5). The Mayor may submit an updated estimate after that date, but must explain why the updated estimate was fiscally necessary if the update is submitted after May 25; and Require that, when the Mayor makes changes to the City’s financial plan that would require a budget modification to implement, the proposed budget modification shall be submitted to the Council within 30 days. Shall this proposal be adopted?

Proposal Number 5, a Question: LAND USE

This proposal would amend the City Charter to: For projects subject to the Uniform Land Use Review Procedure (ULURP), require the Department of City Planning (DCP) to transmit a detailed project summary to the affected Borough President, Borough Board, and Community Board at least 30 days before the application is certified for public review, and to post that summary on its website; and Provide Community Boards with additional time to review ULURP applications certified for public review by DCP between June 1 and July 15, from the current 60-day review period to 90 days for applications certified in June, and to 75 days for applications certified between July 1 and July 15. Shall this proposal be adopted?