Come for the Wood and Nails, Stay for the Free Advice 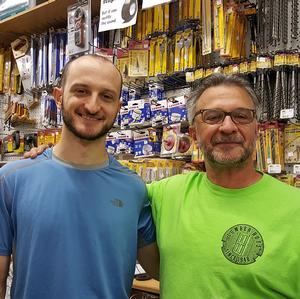 The first thing that hits you is the scent of fresh sawdust—unusual in Midtown. Next is the presence of actual human beings, helpful ones, standing behind an old-fashioned counter, ready to take your questions.

Like, “How do I fix the busted seat on my favorite chair?” “Can you help me squeeze a bookcase into this alcove?” and “Where do I find the right doohickey to fix this whatchamacallit?”

After 71 years, family-run Lumber Boys has heard it all, says Robert Ross, who runs the store with his dad, Steven, adding dryly, “Whenever there’s a pipe leaking in the neighborhood, we know about it.”

Saturday was once their biggest day, but with so many apartment dwellers willing to let someone else do it these days, contractors now contribute the heaviest traffic. Dodging buses and cabs, they pull up along the hectic street on weekdays and jump out in search of sheetrock, concrete mix and plumbing and electrical parts. Or screws— there’s an entire wall dedicated to them.

Much else has changed since 1948, when Lumber Boys opened on the east side of Second Avenue at 38th, twixt a bustling neighborhood and an industrial zone. An Eastern Airlines terminal joined the scene in 1953, but in 1972, when Robert’s grandad Herbert became an owner, the Corinthian condo had yet to go up on the terminal’s foundation, and Con Ed’s colonization of the riverfront was keeping the area low key. “We used to park our forklift overnight on the street,” Robert says.

The shop began as a lumber yard that also made things, aided by a crew of German carpenters and a manual-hoist elevator. Over time, tools, hinges, light bulbs, potting soil and other flotsam joined the inventory.

In 2013 Lumber Boys jumped from its spot between the Bravest bar and the Townhouse Diner to a smaller location across Second. Though it shifted some of its equipment to the Bronx, a table saw is parked in the basement near shelves piled with pine, poplar and oak, birch and maple, claiming credit for those woodsy scents.

And if other hardware stores have moved into housewares and decor, Lumber Boys is still a go-to for plywood and solid dimensional lumber. My husband came here to get custom-fit oak window sills for our 36th-Street apartment, and returned to order a wood door for our new bath. “Home Depot [on West 23rd St.] doesn’t have wood, so they send customers to us,” Robert says.

Foot traffic is steady (“we get a lot of requests for soundproofing”), but the advent of online shopping hasn’t escaped notice by the family, who maintain a website (lumberboys.com) and take orders by email. (Footnote: Members of the Murray Hill Neighborhood Association get a 10 percent discount.) And yes, they deliver.

Personal service is still the main draw. “We’ll help you every step,” says Robert, “though don’t ask us to come over and install that sink.”

Photo of Robert and Steven Ross by Nancy Idaka Sheran.