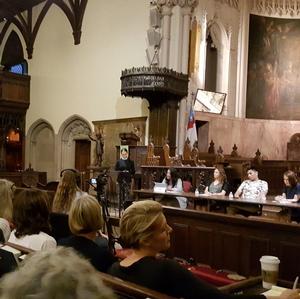 A bill to decriminalize sex trade in New York State (S6419/A8230) has been proposed by NYS Assembly Member Richard Gottfried. Murray Hill Assembly Member Dan Quart is a co-sponsor of this bill, which was introduced in June, in the last weeks of the spring legislative session in Albany. Anti-human trafficking activist, Rev. Adrian Dannhauser organized a panel discussion at the Church of the Incarnation to discuss this controversial measure.

The bill proposes full decriminalization, meaning that sex providers, patrons and those who facilitate the enterprise of sex trade catering to consenting adults will all be able to operate legally in New York State. Sex with minors (under age eighteen) and sex trafficking will still be illegal. Sex trade will not be permitted on school property (lower grades through high school). The bill also provides for the elimination of prior criminal records for sex trade that becomes legal under this bill. Furthermore, sex trade that is legal under this bill will be permitted in multiple dwellings and in one- or two-family dwellings or any building or place. This act shall take effect on the thirtieth day after it shall have become a law.

The panel discussion took place on July 23. Gottfried was invited to speak on the panel to present his bill, and he initially accepted, but then declined shortly before the date of the event. The panelists were Christian Eduardo, a Survivor Leader at the Sanctuary for Families and an advocate for immigrant and LGBTQ rights; Rev. Dr. Que English, CEO, founder and Executive Director of Not on My Watch, Inc.; Dorchen Leidholdt, Director of the Center for Battered Women’s Legal Services at Sanctuary for Families NYC; Iryna Makaruk, survivor of domestic sex trafficking and anti-trafficking advocate. The panel was moderated by Rev. Adrian Dannhauser, Associate Rector at Church of the Incarnation and chair of the Episcopal Diocese of New York Task Force Against Human Trafficking. The four panelists and Rev. Dannhauser are all activists against human trafficking. The panel was intended to be more balanced to show both sides of the issues, but when Gottfried decided not to participate, the panel was admittedly one-sided. The audience was able to submit questions in advance of the event and on index cards at the event, and the panel responded to the questions.

I have reached out to Assembly Member Gottfried's office to ask for a summary of the bill in plain English and to try to get clarification on some aspects of the bill, but have not heard back from his office. I have heard that Gottfried is looking for a place to hold a community meeting on the bill, and we will keep you informed.

I don't believe that the intent of the bill, as written, is to increase prostitution in New York State, but this will certainly be the effect. The global sex industry is a multi-billion dollar business. We could expect massive amounts of global investment to pour into New York City if sex trade becomes legal. If it is not the intent of the bill to increase prostitution, a full decriminalization bill must be enacted in conjunction with a strong regulatory framework.

What would a regulatory framework for full decriminalization of sex trade look like? It might require health checks to protect the health of both the sex providers and patrons. Establishments might be rated like restaurants on their cleanliness and compliance with health regulations. Medical exams should be required for sex providers.

To avoid disruption for residential neighborhoods, the regulatory framework could extend to determining sex zoning and locations for street walkers.

It is not clear how this state bill will interact with local laws and rules, for example zoning laws defining residential neighborhoods. Sex trade should be prohibited in residentially zoned neighborhoods and in residential apartment buildings which specify in their bylaws or lease agreements that there should be no commercial activity in the apartments. Would sex trade be prohibited in public buildings such as homeless shelters or public housing? Buildings should be able to specify in their bylaws or lease agreements that they are “sex trade free” in the same way they say they are “smoke free” or “pet free.”

City sidewalks and streets are regulated regarding street vendors, food carts, and newsstands. Even the Desnudas in Times Square have rules of behavior. In the same way, public streets and sidewalks should be regulated regarding street walkers and vehicles parked along the curbs. We would need bylaws specifying where they will be permitted to practice their trade as well as a cap on how many can operate in a given area.

Advertising should be regulated, as it is for cigarettes and alcohol, so that it will not be seen by minors.

If sex trade becomes legal it should be treated like other commercial enterprises in regards to labor laws, sick days, unionization, etc. Bylaws might be needed to limit the number of enterprises allowed to practice in a given neighborhood, similar to the way liquor stores are regulated, where neighborhoodd wish to maintain a diversity of businesses.

The ideas mentioned above are not an indication that I am in favor of full decriminalization, but rather are meant to point out the complexity of implementing it. It is important to take the time to get the bill right, as legalization of sex trade is potentially very disruptive to neighborhoods and can have the unintended consequence of increasing prostitution. It is not necessary to enact all parts of the bill at once. The less controversial section to decriminalize sex providers could be enacted first. The effects of this change could be reviewed in a few years to see if the bill should go further.

The process also has to be right. There should be widely publicized public hearings, a long comment period and time for communities all over the state to discuss the bill. There should be time for local municipalities to adjust their laws, if needed, before the bill takes effect.