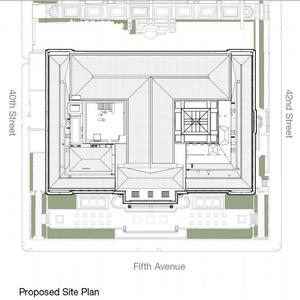 On February 19, the Landmarks Preservation Commission held a public hearing on some of the proposed changes presented in the New York Public Library’s Master Plan for the building on Fifth Avenue between 40th and 42nd Street. This building is one of New York City’s most iconic landmarks. The next phase of the work is narrow in scope; the LPC has designated this permit LPC-19-35199, 476 Fifth Avenue - New York Public Library - Individual and Interior Landmark. The architectural firm Mecanoo Beyer Blinder Belle presented the plans and renderings. The driveway and courtyard for truck loading and unloading on 40th Street will be reconfigured to accommodate modern-sized trucks, an accessible entrance will be created with a ramp from 5th Avenue at 40th Street, and the plaza on the 40th Street side of the building will be improved. Materials similar to the existing materials will be used. The new entrance will lead to the new Center for Research & Learning, a space designed for school groups, inside the building.

Researchers expressed concern that there are still no plans or money set aside for the Library’s stacks, several floors of shelves that used to house books in the research collection. The books were shipped to Princeton, New Jersey, in what was supposed to be a temporary move, but there appear to be no plans to upgrade the stacks with necessary climate controls and to move the books and other primary research materials back to NYC. Storing the books in New Jersey makes them much less convenient for researchers and scholars who now must wait for days or even longer to get access to the materials.

There were mixed comments from preservation groups and architects about the architectural merits of the proposed changes, especially concerning the raised planter in the center of the plaza. The LPC did not approve the plans at this meeting, and asked the NYPL to improve the planter design. Another hearing will be scheduled. The LPC has been trying to speed up the approval process, but as this building is a highly significant landmark, a delay was thought to be appropriate.