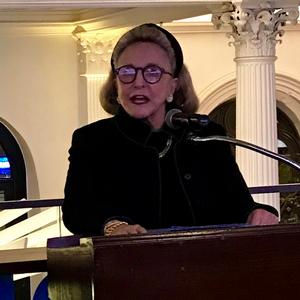 On the evening of November 27, 2018, a group of invited guests, including preservationists from New York City’s key preservation groups, attended a special event hosted by Barbaralee Diamonstein-Spielvogel, founder of the Historic Landmarks Preservation Center and the Cultural Medallion Program. The Murray Hill Neighborhood Association was one of several co-hosts. The event, held at the Public Theater (the first designated NYC individual landmark) celebrated the publication of Dr. Diamonstein-Spielvogel’s new book, Notable New Yorkers. This handsome volume commemorates more than 20 years of the HLPC’s Cultural Medallion Program, a program that honors distinguished New Yorkers in the arts, science, business, and politics by installing descriptive terra cotta medallions on the buildings where these notable people once lived.

The event also gave Barbaralee Diamonstein-Spielvogel the opportunity to highlight the fact that April 2020 will mark the 55th anniversary of the creation of the Landmark Preservation Commission. The Commission was created in 1965 in response to the loss of historically significant buildings in New York City, most notably Pennsylvania Station. Thanks to the creation of the LPC, and with support from preservation and neighborhood associations, thousands of buildings have been granted landmark or historic district status, saving them from demolition and preserving the city’s historical, architectural and cultural history. The NYC Landmarks50+ Alliance was created five years ago to honor the 50th anniversary of the creation of the LPC and to educate the public about the important role of historic preservation. In 2020 it will become the NYC Landmarks55+ Alliance. Look for plans to celebrate this milestone 55th anniversary of the passage of the Landmarks Law.

The Metropolitan Museum, the Whitney Museum, The New-York Historical Society and the Brooklyn Historical Society have copies of Notable New Yorkers for sale in their bookshops. You can also order Notable New Yorkers by sending a check or money order for $25, payable to Historic Landmarks Preservation Center to: HLPC, 720 Park Avenue Apt. 2A, New York, NY 10021. Please print your first and last name on a sheet of paper and include your phone number, home mailing address and email address, and include that sheet with your check or money order.