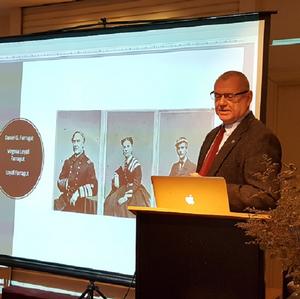 The Makor Center for Spiritual Judaism was the setting for a lively and informative talk and slide show by blogger and author Tom Miller. This event, held on Saturday April 6th, drew a full crowd, eager to absorb Tom’s encyclopedic knowledge about a group of prominent people who once lived in Murray Hill. Mr. Miller’s gift for story-telling created the mood and set everyone back to the time period in which these people lived.

The talk focused on the rich history of a group of people and buildings on one block in Murray Hill—East 36th Street between Lexington and Park Avenue. This block was once home to a number of distinguished political, business and military figures, including Admirals Benjamin Franklin Isherwood and Daniel G. Farragut of “Damn the Torpedoes” fame. Shipping magnate Charles Carow and his wife Gertrude Elizabeth Tyler made their home at 114 East 36th Street, and Franklin and Eleanor Roosevelt moved to this block after their marriage, calling their townhouse at 125 East 36th Street their “14 foot mansion.”

William Travers Jerome, a New York District Attorney at the turn of the century also made his home on East 36th Street. Known for his campaign against political corruption, he was famous for prosecuting and sending Pittsburgh railroad heir Harry Thaw to prison. Thaw, who married model and actress Evelyn Nesbit, was the man who shot and killed architect Stanford White in a jealous rage when he learned that White had had an affair with Nesbit years earlier.

The block was also home to The Louisa E. Rostan House at 111 East 36th Street, named for the woman who had a school at that address. The school was for young ladies, groomed for future lives in polite society. It was here that they learned French, music, art, and etiquette. When the house was sold in 1872, Rear Admiral Benjamin Isherwood and his family moved in.

To learn more about other famous residents who lived on East 36th Street and to read the history of other buildings and neighborhoods in Manhattan, check out Tom Miller’s blog Daytonian In Manhattan.

The Preservation & Design Committee of The Murray Hill Neighborhood Association thanks Tom Miller for his lecture and Terry Katz from the Makor Center for hosting this event.

This event was sponsored by the Preservation & Design Committee of The Murray Hill Neighborhood Association, The Makor Center for Spiritual Judaism, Stein Berre and Britt Smith.