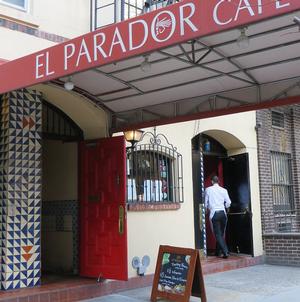 Consider the Mole Poblano they’ve been serving at El Parador Cafe for nearly 60 years. It’s pretty much the same complex, subtly spiced dish that put El Parador on the culinary map when it opened in 1959, according to its current owner and top chef, Alex Alejandro. The main difference is ingredients that used to land in New York dried or canned are now sold fresh, “thanks to demand and immigration,” he says with a smile.

A Spanish emigrant himself, who “grew up watching my whole family cook,” Alex took over the restaurant in 2008, after his dad, Manuel, stepped down. Today, El Parador, located at 325 E. 34th St. (elparadorcafe.com), ushers third-generation-plus customers into a polished setting that pays homage to the past while embracing the new, be it online delivery service or the in-hot-demand deep-fried jalapeños rellenos—stuffed with chunky peanut butter.

El Parador peers out on a block without much foot traffic, relying instead on word of mouth and repeat visitors. It makes for a warm atmosphere. “I met my wife here,” Alex says.

The restaurant offers members of the Murray Hill Neighborhood Association a discount (10 percent off, cash only), but there’s an even better way to save: Come during afternoon tasting hour, 3 to 7 p.m., Monday through Saturday, when the discount does not apply but you can get well-priced small plates and drinks in the bar area. A delicious margarita is just $6, a glass of Spanish wine, $9.

An equally enticing deal is available at lunch: three courses for $23 (“a true bargain,” Alex says, sighing as if contemplating food and labor costs). Dinner entrees start at $18; a plate piled with three double-cut lamp chops, guajillo salsa and charro beans is $32.

El Parador welcomes wedding parties and business gatherings, vegetarians and the gluten-free. Indeed, the entire staff is friendly, in a formal, old-fashioned way you don’t find in many places these days. The tables are well dressed, the lighting flatters, and the dining area’s sound-deadening ceiling panels are genius.

Framed reviews include ones from The Times by Craig Claiborne (1966), Bryan Miller (1991) and Alex Witchel (2010). Witchel described herself as a stuffed-jalapeño skeptic who tried a few with drinks and liked them so much she nearly ordered them for dessert.

“The feel is the same today as the day it opened,” says Alex, adding that he hears from former New Yorkers who want a table when they are back in town. “People say thank you for not changing.”