Private and group tours of Murray Hill are now available 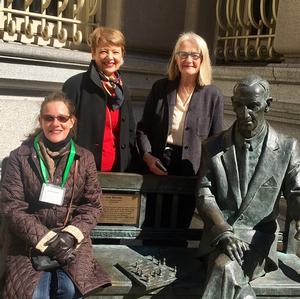 Take a tour of Murray Hill, nestled between two of the world’s most iconic streets, 34th and 42nd Streets, and surrounded by NYC landmarks, the Empire State Building, Grand Central Terminal and the Chrysler Building. This historical residential enclave has 15 individual landmarks and 251 buildings listed on the National Register of Historic Places.

Walk around the Murray Hill Historic District (Madison-Third Avenue, 34th-42nd Street) and discover its many historic landmarks, including the Union League Club, The Morgan Library and the Polish Consulate. Learn about the architects who built them, including C.P.H. Gilbert, Stanford White, Emery Roth and Fred French. Hear stories about the famous people who once called Murray Hill home, including Franklin and Eleanor Roosevelt, JP Morgan and Andy Warhol. Find out how Mary Murray detained British General Howe during the Revolutionary War in 1776 to allow the American army to escape.

Tour guides focus on the unique architectural qualities of the buildings as well as the historical evolution of the neighborhood and its reputation as a residential oasis in Midtown Manhattan.