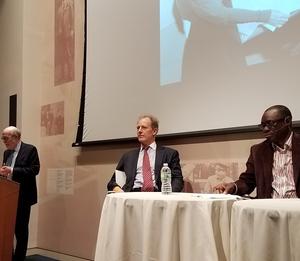 On October 11th, Murray Hill Neighborhood Association members attended an event to commemorate Eleanor Roosevelt’s role in the creation of The Universal Declaration of Human Rights on the 70th anniversary of its adoption by the United Nations in 1948. There wasn’t one empty seat in the auditorium at Hunter College’s Roosevelt House Public Policy Institute as the audience also observed Eleanor’s birthday on the same day 134 years ago.

Mrs. Roosevelt was a life-long activist for human rights and social justice. She was nominated as a delegate to the U.S. delegation to the United Nations by President Harry Truman in late 1945 and subsequently became head of the Human Rights Commission. She drove the consensus-building for the document, and considered the adoption of the UDHR in December 1948 to be her most important achievement. The UDHR was written in reaction to the atrocities of World War II, and most UN member states participated in the final drafting of the document. It provides guidelines to guarantee the rights of every individual “everywhere in the world,” a goal suggested by President Franklin Delano Roosevelt in a notable speech of 1941.

Roosevelt House on East 65th Street, the Roosevelts’ residence from 1908 to 1942, was sold to Hunter College after the death of Franklin's mother Sara Delano Roosevelt. It is the successor to the Roosevelt home at 125 East 36th Street in the Murray Hill Historic District where the Roosevelts lived for the first three years of their marriage (1905-08) and had their first two children. A Cultural Medallion was installed on the 36th Street building earlier this year.

On the parlor floor of Hunter’s Roosevelt House there is an exhibit with photos and text describing the process of drafting the UDHR and Eleanor’s leading role. This exhibit was curated by Deborah Gardner, Historian & Curator of Roosevelt House. The exhibit is free and open to the public: Mondays-Saturday, 10:00am-4:00pm, at 47-49 East 65th Street.

The event included a talk with welcoming remarks by Harold Holzer, Jonathan F. Fanton Director, Roosevelt House Public Policy Institute, and Reverend J. Douglas Ousley, Rector of the Church of the Incarnation in Murray Hill. A discussion followed with panelists Andrew Gilmour, Assistant Secretary-General for Human Rights, UN Office of the High Commissioner for Human Rights, and Babatunde Olugboji, Deputy Program Director, Human Rights Watch. The panel was moderated by Jessica Neuwirth, Director of the Human Rights Program at Roosevelt House. The panelists spoke about the state of human rights around the world since the adoption of the UDHR, suggesting that the progress in human rights in the last quarter of the 20th century had slowed in recent years. After their presentations, the panelists answered questions from the audience.

The event ended with a reception where guests could mingle and speak with the presenters.

This event was co-sponsored by the MHNA Preservation & Design Committee and The Roosevelt House Public Policy Institute at Hunter College.

Photo (detail) by Susan Demmet: (left to right) Harold Holzer, Andrew Gilmour and Babatunde Olugboji, and of the attendees in the Roosevelt House auditorium.

History of the Document: http://www.un.org/en/sections/universal-declaration/history-document