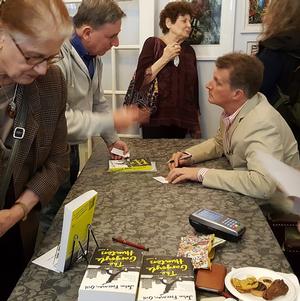 The Center for Applied Judaism was the perfect venue for a talk by writer John Freeman Gill on Sunday November 4th. The event attracted a lively group of 52 people. Mr. Gill, a native New Yorker whose writing has appeared in The New York Times, The Atlantic and The Observer is the author of The Gargoyle Hunters. This coming-of-age novel with a strong theme of preservation is set in Manhattan in the early 1970’s, and is told from the point of view of 13 year-old Griffin. The novel captures the grit and soul of the city which, at that time, was undergoing a major financial crisis. In the novel and in his talk, Gill describes crumbling buildings and the theft of sculptures, ornaments, and, yes, gargoyles, from buildings that were being destroyed to make way for urban renewal.

The author credited the immigrant artisans who came mostly from the British Isles, Italy and Germany in the nineteenth century with creating the architectural sculptures on many New York City buildings, leaving their indelible, individual imprints. He talked about the fanatical real life gargoyle hunters, including the famed Ivan Karp, known as the “king of the gargoyle hunters” who rescued these artifacts from demolition, somewhat like tomb raiders, although for a more altruistic cause. With an impressive slideshow to accompany his talk, Mr. Gill, who came from a “family of scavengers” displayed photos of the architectural ornaments, including satyrs, gargoyles and griffins that the young protagonist and his father try to salvage in his novel. Gill’s knowledge and passion for this distinctive American art form, as well as his love for New York City, made his talk particularly personal and engaging.

A reception followed the talk and included refreshments as well as piano music performed by the talented Bob Dawson. Guests had the chance to speak with the author and have him sign copies of the paperback version of the book which were available for purchase. The book was originally published in hardcover.

Our thanks go to John Freeman Gill, Terry Katz from the Center for Applied Judaism, Bob Dawson, and Nancy Idaka Sheran who contacted the author to arrange this talk. It was a very enjoyable way to spend a few hours on a Sunday afternoon.

This event was co-sponsored by the Preservation & Design Committee of The Murray Hill Neighborhood Association and The Society of Jewish Science / Center for Applied Judaism.