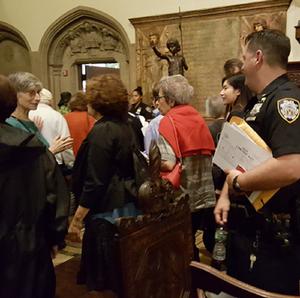 The Murray Hill Neighborhood Association annual meeting was held on October 4. This meeting provides us with the opportunity to hear guest speakers who update us on neighborhood issues. The meeting also enables us to tell our neighbors about the work of the Association, and allows us to hear from you, the people who live and work in Murray Hill.

MHNA President Diane Bartow introduced the meeting. Then, Fred Arcaro, President of the Manhattan East Community Association, spoke about the activities of MECA, our sister association. Treasurer Barbara Sagan presented the financial statement, and Trustee Becky Flig read the names of the Trustees for the 2018-2019 year. Matt Roberts, chair of the Quality of Life Committee introduced the first two guest speakers. Marilyn Noa, Neighborhood Coordination Officer for the 17th Precinct Sector A, spoke about the Neighborhood Policing program which was launched in the 17th Precinct during this past summer. She encouraged people to come to the monthly Build the Block meetings. These meetings will provide opportunities to get to know our neighborhood officers better. Police Officer Ryan, who works behind the scenes with the Neighborhood Coordination Officers, was also there.

David Frank, Chief Engineer for the Infrastructure Replacement Project on 2nd Avenue and surrounding areas, spoke about the project and explained why it is necessary. Karen Flores, the community liaison for the infrastructure project was there as well. She sends out weekly work advisories for the project, which are posted on the MHNA website. Our new City Council Members Keith Powers (District 4) and Carlina Rivera (District 2) spoke about Participatory Budgeting which has been introduced for the first time in our districts. Participatory Budgeting is funded with $1 million per district and gives residents the opportunity to propose projects that will improve the neighborhood. All proposals will be considered! They also spoke about issues that concern our neighborhood such as traffic, noise, construction, illegal hotels and loss of affordable housing and neighborhood businesses. Some of these issues are being addressed withlegislation.

Community awards were presented to three people: Terry Katz, Executive Director of the Society of Jewish Science/Center for Applied Judaism, Enid Klass and Marisa Bulzone. Katz, on behalf of the SJS, has reached out to the MHNA to find ways to collaborate and to provide events for the larger Murray Hill community. We also thank the SJS for being the caretaker of a building in the historic Murray Hill district. Enid Klass received a Volunteer Appreciation award. She is an honorary trustee of the MHNA, a member since the 1960s, has served as a trustee and has been a mentor to many of the current trustees. She is also a community watchdog, always looking for ways to beautify the neighborhood and to keep it clean. Marisa Bulzone is a past trustee and community activist who played an important role in keeping 34th Street a two-way street with vehicle access to all buildings. As a trustee and member of the Preservation & Design Committee, Bulzone produced the prints and notecards of Murray Hill landmarks that are still sold today. She also developed the bidding system for the Street Festival Silent Auction.

Committee chairs gave updates about the work of the Association. Business Committee co-chair Lilli Seidman Davis spoke about the next business networking event on December 6 and about the Discount Program. Susan Demmet, co-chair of the Preservation & Design Committee, gave the dates of upcoming P&D events and also described the three Cultural Medallions installed on buildings in the Murray Hill historic district this past year. She introduced a new program: Private and Group Walking Tours of Historic Murray Hill. Stein Berre, co-chair of the Greening & Cleaning Committee spoke about the MHNA’s cleaning events and tree replacements in the neighborhood, and also about the launch of the MHNA’s collaboration with the 30th Street Men’s Shelter to hire people to help keep our neighborhood tidy. John Chadwick spoke about the work of POPA (Patrons of Park Avenue), the group responsible for the maintenance and beautification of the Murray Hill Malls on Park Avenue. Most of the donations for the landscaping and upkeep of the malls comes from buildings that line Park Avenue, In addition, there is a Gardeners program for people, businesses and organizations who would like to donate to the malls.

After the meeting there were breakout sessions and a light dinner was served. Thank you to all who attended and spoke at the meeting!