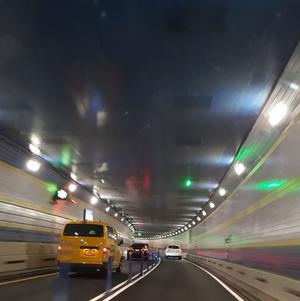 The project to restore the Queens Midtown Tunnel and to make it more resilient after it was flooded and heavily damaged during Superstorm Sandy (2012) was substantially completed in Spring 2018. This was eleven months ahead of the original target completion, due to an accelerated schedule. All of the major systems in the tunnel were replaced, including electrical, lighting, communications, monitoring and control systems. Restoration and mitigation was done at the tunnel’s mid-river pump room, where new submersible pumps were installed. Structural work included the replacement of catwalks, duct banks, wall tiles, ceiling finishes, polymer panels, curbs and gutters. The tunnel also received new roadway LED lighting and new clearly-marked exit signs, lights and emergency phones. The Capital Program (non Sandy) work includes replacement of the fire line system in both tubes and the complete rehabilitation of the Manhattan Exit Plaza. Representative Carolyn Maloney helped to secure federal FEMA funding for these repairs. Photo: Queens Midtown Tunnel

The full weekend tube closures came to an end in July. There will be continuing related work at the portals for future storm mitigation, including flood door installation, through the end of 2018. There will also be off-peak or nighttime tube closures for remaining tasks, as well as routine maintenance such as tunnel washing. The new Tunnel Operations Director is Cassandra Edghill, email CEdghill@mtabt.org.