Landmarks Preservation Commission hearing on changes to the landmark B. Altman Building, July 24, 2018 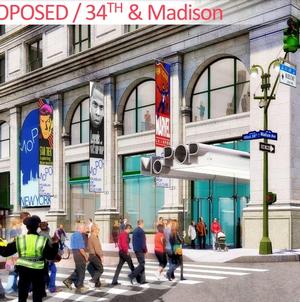 The Museum of Popular Culture, new owner of a portion of the landmarked B. Altman building, presented proposed changes to the Landmarks Preservation Commission on July 24, 2018: LPC-19-26364, 188 Madison Avenue - B. Altman & Company Department Store Building - Individual Landmark. Manhattan Block 864 - Lot 7502. Community District 5. Certificate of Appropriateness: application is to install a marquee and banner signs, and replace infill [open up an entrance on 34th Street near Madison Avenue].

The Certificate of Appropriateness was approved with modifications.

Report of the hearing courtesy of Elaine Silber, Co-Chair of the MHNA Preservation & Design Committee

The architect and the artistic director presented their plans for MoPOP:
https://www1.nyc.gov/assets/lpc/downloads/pdf/presentation-materials/20190724/188-Madison-Avenue.pdf

The main entrance is planned on 34th St off Madison Ave. The plans show a lot of large flags and banners, advertising the museum and its current exhibitions, as well as a marquee on the 34th Street side over the entrance. Due to the nature of the museum, the banners are fairly flashy and the marquee with MoPop’s name is also quite prominent, extending 12 feet.

MoPOP plans to restore and repair the existing awnings - a distinct feature of the building.

There were testimonies from The 34th St Partnership, the Association for a Better NY, the Chamber of Commerce and the NY Landmark Conservancy, all enthusiastically supporting the addition of MoPop to the neighborhood. Most felt the plans were respectful of the building’s history, and that the addition of the museum would revitalize the neighborhood, and bring customers to local restaurants and businesses. The Morgan Library, Oxford University Press and The Museum of the Moving Image also sent letters of support.

Community Board 5 denied approval, unless the projected size of the marquee is reduced. There were also other testimonies against aspects of the proposed changes from the Historic Districts Council and others.

The Library announced that the staff, programs, and collections of the Science, Industry and Business Library will be moved into the new, fully renovated Stavros Niarchos Foundation Library (formerly Mid-Manhattan) on 40th Street and Fifth Avenue. The only exception are the research collections, which will be accessible at the 42nd Street Library. The Mid-Manhattan project is already underway, and is scheduled to open in 2020. It is only when that space is ready that the Science, Industry and Business Library will move. Until then, it will continuing operating from the B. Altman space.

MoPOP's application to the LPC: Certificate of Appropriateness