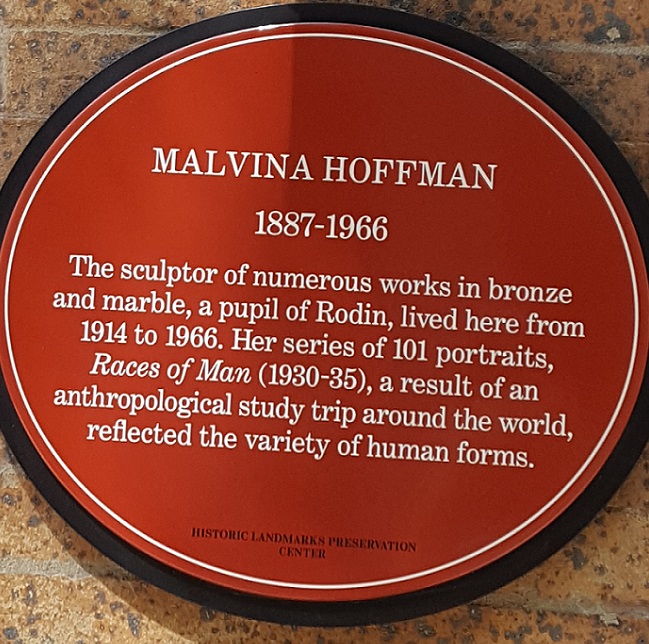 The Cultural Medallion Program was created more than 15 years ago under the leadership of Barbaralee Diamonstein-Spielvogel, Chair of the Historic Landmarks Preservation Center. The HLPC installs descriptive plaques on buildings to honor and recognize distinguished New Yorkers in the arts, science, politics, business, education and sports, who once lived in those buildings. Some past recipients of these cultural medallions include the buildings in which Miles Davis, Edward Hopper, John Lindsay, Edith Wharton, Leonard Bernstein and Jackie Robinson once lived.

The Murray Hill Neighborhood Association’s Preservation & Design Committee is excited to be working with the HLPC to support this cultural program, and we have recommended several buildings in Murray Hill in which notable people once lived or worked. Although there are close to 100 medallions located throughout New York City, there is currently only one cultural medallion in Murray Hill at 157 East 35th Street, honoring the sculptor Malvina Hoffman. Due to the number of illustrious residents who once lived in Murray Hill, the P & D Committee is exploring several names to add to that list, including Franklin and Eleanor Roosevelt, the illustrator Charles Dana Gibson (creator of the Gibson Girls), the actors Jessica Tandy and her husband Hume Cronyn, two-term mayor William Grace, architects Marcel Breuer and William Delano, as well as William F. Buckley, founder of the National Review. These influential people all lived or worked in the area from East 35th Street to East 38th Street, Madison to Third Avenues.

The ceremony for the medallion installations is memorialized by having several speakers at an award ceremony at the building site. The event is videotaped so that there is a permanent historical record. The addition of more cultural medallions in Murray Hill will help to preserve and commemorate the historical significance of our neighborhood and create a sense of pride in our neighborhood’s vibrant cultural heritage.

Funding for research and fabrication of the medallions and the award ceremony comes from individual sponsors, honored building owners and private donations. If you would like to sponsor or contribute to the Medallion Program, please visit our website at www.murrayhillnyc.org and click Donate. Contact Susan Demmet, email sldemmet@gmail.com when you donate so that your donation to this program can be acknowledged, and if you know of a significant person who lived in Murray Hill whom you feel should be nominated for a Cultural Medallion. The P & D Committee will hold a Special Walking Tour of Landmarked Buildings on October 14, with all proceeds dedicated to the MHNA Cultural Medallion Program. RESERVE NOW at murrayhillnyc.org/LWT.