Before Hillary There Was Victoria Woodhull 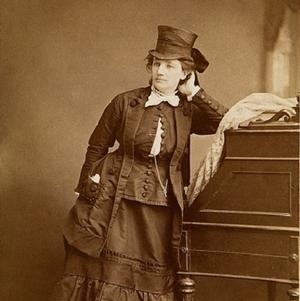 The first woman to run for President was a Murray Hill resident. Nominated by the Equal Rights Party in 1872, her running mate was the former slave and abolitionist leader Frederick Douglas (he never accepted this nomination). It is remarkable that she ran for President before women were granted the right to vote. Victoria California Clafin Woodhull was an advocate for women’s rights, including suffrage, the 8-hour work day, a graduated income tax, social welfare programs, profit sharing, free love and the legalization of sex work.

Born in 1838 in a rural town in Ohio, Victoria had an abusive childhood, with little education and an unhappy first marriage to Canning Woodhull, a doctor. She believed in spiritualism, and her first career was as a successful medium. Sometime around 1866, she married her second husband, Colonel James Harvey Blood. Together with her sister, Tennessee Clafin, they moved to New York City. With the assistance of Commodore Vanderbilt, who had a close relationship with Tennessee, the two sisters opened a brokerage firm, Woodhull, Clafin and Company in 1869 at 44 Broad Street. They were the first women to operate a brokerage firm, and were called “the Queens of Finance” and “Bewitching Brokers.” In 1870, the two sisters founded a newspaper, the Woodhull and Clafin’s Weekly, which advocated feminism and was used to support Victoria’s bid for the presidency. The paper is also known for printing the first English version of Karl Marx's Communist Manifesto in its December 30, 1871 edition.

However, other supporters of the suffrage movement, including Susan B. Anthony and Henry Ward Beecher, were not allied with Victoria, They thought her too ambitious, and she threatened to expose Beecher’s infidelities. Woodhull was arrested on charges of obscenity and libel, but after a sensational trial, she was acquitted.

Victoria and Colonel Blood lived in Murray Hill at 15 East 38th Street (the building no longer exists). In October 1876, Woodhull divorced James Blood. Less than a year later, when Commodore Vanderbilt died, his son William Henry Vanderbilt gave Victoria and Tennessee a large sum of money. which enabled them to leave the country and establish themselves in England. There, she published the magazine The Humanitarian. In 1883, she married an English banker, John Biddulph Martin. She died in England in 1927.

The 1980 Broadway musical Onward Victoria was inspired by Woodhull's life.

In March 2008 she was honored by the Office of the NYC Manhattan Borough President, Scott Stringer, and was included in the Women’s Rights Historic Sites Map.

Victoria Bond composed the opera Mrs. President about Woodhull. It premiered in 2012 in Anchorage, Alaska.