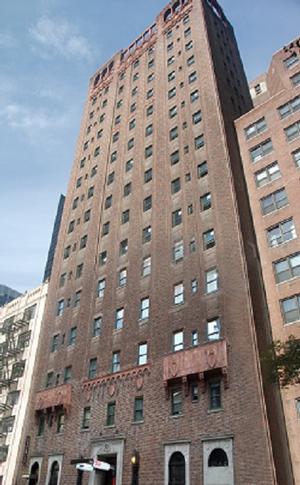 This is the fourth and last article featuring fourteen individual landmark buildings in historic Murray Hill, presented chronologically by the date that the building was designated as a landmark. This series appears in conjunction with the celebration of the 50th anniversary of the New York City Landmarks Law. The Murray Hill Neighborhood Association’s Preservation & Design Committee has been an active participant with the Landmarks50 Alliance’s two-year celebration to honor landmarks in all five boroughs of the City. The LM50 celebration continues through 2016.

45 East 39th Street, The Pod 39 Hotel (between Lexington & Third Avenue.)
Built in 1916 in the Northern Italian Renaissance style for the Allerton Hotel chain and designed by Arthur Loomis Harmon, this became the trademark style for the Allerton Hotel Chain. It was owned and occupied as a young woman's reasonably-priced residence by the Salvation Army until 2012, when it was renovated and a new frontage was installed for the Pod 39 Hotel. It is known for the lovely roof top bar in the summer and the main floor Mexican restaurant. It was designated a NYC landmark in 2008. 36 East 38th Street, Beaux Arts Style Mansion (between Madison & Park Avenue)
Built in 1861, it was one of three handsome four-story row houses owned by shipping merchant, Charles Fox. It became the home of well-known shipbuilder Richard Poillon with his wife Mary and their children until her death in 1901. Richard died in 1891.
The home was purchased in 1902, by socially prominent Middleton S. and Emilie Burrill. Desiring a larger and grander space, they commissioned architects Hoppin & Koen to renovate and enlarge the home with an additional floor and a rear extension. A Beaux Arts style facade replaced the original brownstone frontage with a wide staircase, three identical arches and a stately stone balustrade balcony.

The home became a multiple dwelling rooming house in 1929 and was converted into apartments in 1945. It was designated a NYC landmark in 2010. The Union League Club, 38 East 37th Street (at Park Avenue)
Built in 1931, this massive Georgian Renaissance style building was designed by Benjamin Wistar Morris. It stands on property once belonging to the family of J.P. Morgan.

The ten-story building height is visually reduced by the location of the main cornice at the fifth floor level with the top stories set back from the street line. Broad Palladian windows and a handsome bowed-wall entrance contribute to the building's graceful design. The entrance foyer and grand staircase, a New York City Interior Landmark, stands as one of Morris's great designs. The exterior of the building was designated a NYC landmark in 2011.

The club was founded in 1863 by concerned citizens, to support President Lincoln and to help preserve the Union. Many prominent civic, state and national leaders have enjoyed the fellowship of the club. Fifteen presidents, seven senators, many congressmen, diplomats, cabinet members and CEOs of major corporations have been members over the past 152 years.