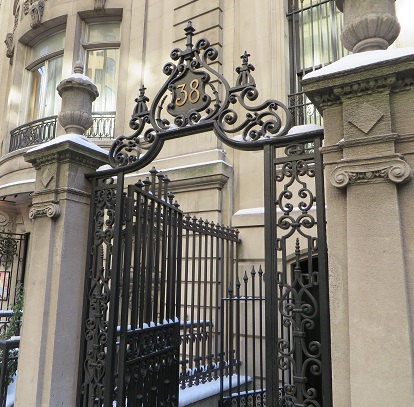 Victoria California Clafin Woodhull, a Murray Hill resident, was the first woman to run for President, nominated by the Equal Rights Party in 1872.

December 2016, Smithsonian Magazine, Untangling the History of Christmas Lights, This bright idea was ahead of its time, by Jamie Malanowski. In 1882, in a townhouse at 136 East 36th Street in New York City, Edward Hibberd Johnson...loyal lieutenant to Thomas Edison was the embodiment of his era: part engineer, part businessman, part Barnum. In 1871, Johnson hired Edison, then a 24-year-old inventor, as a consultant for the Automatic Telegraph Company. Edison “ate at this desk and slept in a chair,” Johnson later recalled. “In six weeks he had gone through the books, written a volume of abstracts, and made two thousand experiments...and produced a solution.” Walking Tour of 15 Landmarks Attracts Many to Murray Hill in Support of Cultural Medallion Program!

New York Times Article about the sale of Admiral Farragut's former home at 113 East 36th Street in 1917.
Admiral Farragut was a Murray Hill resident at the end of his life, was one of the most poupular Americans of his time, and was noted for saying (paraphrased) "Damn the torpedos, full speed ahead."