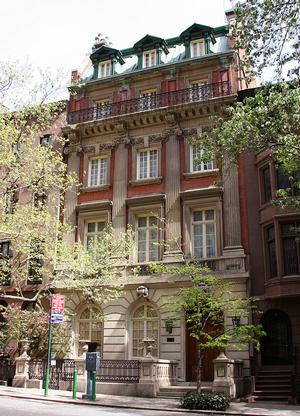 Built in 1903 for the prominent banker James F. D. Lanier and his wife Harriet by architects Hoppin & Koen. It was landmarked in 1979.

The three-part composition of this opulent French Renaissance house is rich in detail, and of almost overwhelming scale to the neighborhood. It is accentuated by the stone piers with urns at the sidewalk fence. A pair of 1854 brownstones were demolished to make way for this magnificent home.

Built in 1911 as the Adelaide L. Douglas residence, it is perhaps the most sophisticated house in Murray Hill. It was landmarked in 1979.

It is elegantly detailed and proportioned in the French Renaissance style by architect Horace Trumbauer. Each floor is treated differently, as the facade gently steps back from the property line. Details range from the deeply recessed first floor opening, to the second floor balcony, to the recessed fourth floor wall permitting a full colonnade to the dormered mansard roof.

It was the former home of the U.S. Olympic Committee, now the Permanent Mission of Guatemala to the United Nations.

Built in 1854, and landmarked in 1979, it is one of a row of six brownstones. A neo-Georgian Stanford White facade was added in 1901 for Thomas Clark, a banker and a collector. The front is distinguished by the quasi-greenhouse bay window that dominates the front wall over a columned entrance porch.

The Collectors Club, a stamp collectors association founded in 1896, purchased the building and moved to this location in 1937. Built in 1902, by architect Ralph S Townsend for William R.H. Martin, it was landmarked in 1997. This carriage house was later sold to George S. Bowdoin, a member of the J .P. Morgan firm who lived at 39 Park Avenue. Mr. Bowdoin converted it to a garage in 1918.

The carriage house is modeled after a Dutch townhouse, with stepped gables and elaborate quoining and voussoirs in rich patterns of white granite trim against Flemish brickwork. Notable features are a pair of carved horse heads and the curious little bulldog at its top. This building is now the home of the Gabarron Foundation—Carriage House Center for the Arts.