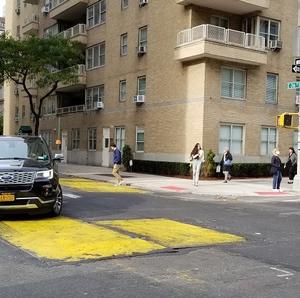 In February 2021, residents along 36th Street, between Park & Lexington Avenue, received an advisory from Con Edison that the 19th century gas main on historic 36th Street would be replaced. This upgrade also involved secondary gas lines from the gas main connecting to the buildings along the street.

The work began in March, when trenches were dug to expose the gas main and the secondary gas lines that connect to the buildings. Metal plates were put over the open trenches in the roadway and sidewalks as the standard safety measure. And then the project stalled for 8 months. During those 8 months, the construction trenches caused problems with the roadways and sidewalks: sinkholes, open holes, uneven surfaces, tripping hazards. The street became impassible for bicycles, which got diverted onto the sidewalks. A young man on a scooter was witnessed taking a fall when riding over a pothole at the corner of 36th & Lexington. He hit the ground, but fortunately was not hurt. For 9 months, the unsecured metal plates on 36th Street, with its heavy traffic going into the Midtown Tunnel, caused continuous noise, and needed frequent adjustments to close the gaps that were exposed when the plates shifted.

The metal plates that covered the open trenches, and gaps around them, exposed the surrounding buildings to gutter water whenever it rained. Water flowed unobstructed from the street's gutters into the open trenches and then into the basements, causing damage to historic buildings.
This extended period of dangerous and damaging conditions drove the 36th Street community to get involved. 900 flyers were printed and distributed. A concerned resident living on 36th Street spent 10 days tracing the areas of responsibility for the project to find out why the project had stalled, and what could be done to get it finished. His investigations took him to New York City and New York State government agencies, ConEd, and CAC, the project sub-contractor. It turns out that very restrictive work permits had inaccurately been issued to Con Ed for the project. A Department of Transportation (DOT) supervisor who issues the permits helped by reviewing the details of the plan so that inaccuracies could be identified and corrected. Permits were re-issued allowing larger crews to work more days per week. The New York State Department of Public Service played a vital role in helping to find resolution by consolidating the complaints that were filed with them and holding ConEd and CAC accountable, then following up on the status of the complaints. The ConEd operators logged follow-up calls and helped to connect the dots.
And now, after a couple of intensive weeks of work by ConEd and its sub-contractors, the gas line replacement work along 36th Street (between Park and Lexington) has finally been completed. The last few noisy metal plates which remained in the intersection of Park Avenue & 36th Street have been removed and all road surfaces are restored. The neighborhood thanks all of the people who facilitated the completion of the project and for getting the work done prior to November 15, which is the start of the Holiday Season construction embargo in NYC. After that date, only emergency work is done until 2022.

If you will be submitting complaints about this project, please direct them to the NY State Department of Public Service.  Complaints can be submitted online at dps.ny.gov,  tap File a complaint, tap Gas, tap ConEdison, and then complete the form. You’ll also need your ConEd account #, from your bill.

Just for the record, calls to 311 did not help. The 311 operators routed the calls to Con Ed, and "emergency response teams" were sent, but the only outcome was to close the complaint without resolving it. This was done for hundreds of complaints.