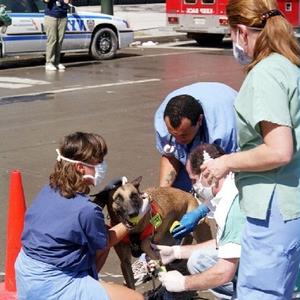 On their way to work, veterinarians Dr. Barbara Kalvig and Dr. James M. Shorter saw smoke over downtown Manhattan. Radio reports provided only sketchy details about what was happening, and cell phone reception became patchy. It was a few minutes after 8:46am on September 11, 2001, just after the first plane hit the World Trade Center.

News of the terrorist attack and collapse of the towers became clear after they and other staff members arrived at the veterinary hospital. Dr. Shorter rescheduled the day’s appointments and began to establish a response. Together with two of their technicians, the team packed a trunk with medical supplies and headed toward Ground Zero. Other members of the team remained to cover the practice. As trained medical personnel, Kalvig and Shorter wanted to offer their help and supplies in any way that might be needed. Like first responders everywhere, they were anticipating thousands of people with injuries.

Driving downtown, they were waved through checkpoints to a plaza being set up as a triage site to accept the injured. Kalvig and Shorter’s medical supplies supplemented bottles of alcohol and bags of cotton balls that were on the ground. Civilians, ambulances, and medical personnel began arriving, each with a stock of equipment or everyday items for emergency use. Physicians took charge, dividing volunteers into taped off areas color coded for triage, and prepared ad hoc teams with plans of action. Dr. Kalvig remembers fabric bolts and shower curtains brought to the scene for makeshift beds and stretchers. Volunteers ran to share supplies and prepare their own units for whatever might come.

As word of a plane crash in Washington DC and rumor of a bomb threat spread through the crowd, it became apparent that no one was arriving from the disaster site. Finally, an announcement was made for everyone to collect their items; they would be transported on city buses to a new location closer to Ground Zero.

Dr. Shorter has a vivid memory of the heavy dust and debris, “As you got closer to Ground Zero, [the dust] was almost a foot thick on the ground and covered everything.” The air was also thick with dust, and office papers floated in the sky. One could see abandoned smashed vehicles, a counter with partially eaten food though broken windows, all covered by a heavy grey layer. The site of the towers was a “war zone” filled with massive piles of twisted metal, pulverized glass, and concrete rubble. Fires were still simmering beneath the surface. It was a scene of destruction, chaos and confusion.

Kalvig and Shorter, and others who arrived at Ground Zero soon found themselves sharing a somber reality with emergency personnel already at the site—many people were missing. The mission was not going to be emergency treatment and transport of thousands of people with injuries, but search and rescue.

Just after the collapse of the towers and over the first 24 hours, NYPD K9 (canine) units began their work, as other K9 search-and-rescue teams would begin to arrive. As time wore on, at the end of each shift, dogs and their handlers were covered with dust and grit and “who knows what else,” to quote one of the veterinarians at the scene. From the beginning, dogs needed medical attention, and word got around that veterinarians were at Ground Zero.

Drs. Kalvig and Shorter, along with their vet techs, Angelita Miranda, Corina Quist, and Tito Zubiaga, worked at Ground Zero over the first 72 hours, heading uptown late every night to collect more supplies and attend to their practice. Along with other local veterinarians who arrived at the scene, they joined forces with first responders from the Suffolk County Society for Prevention of Cruelty to Animals. SCSPCA was dispatched by NYPD on 9/11, and arrived at Ground Zero with their new mobile spay and neuter hospital. The mobile hospital, dubbed MASH, quickly became an active veterinary field station, and would remain for many weeks on West Street, a few blocks north of the disaster site, for triage and treatment of hundreds of dogs.

Together with colleagues at the site, Dr. Kalvig and Dr. Shorter helped establish treatment protocols for the working dogs who would come to the MASH unit with a variety of needs caused by the extreme conditions. Large water jugs cut in half, and garbage dumpsters filled by FDNY hoses, were used as early resources for cooling, wound care, and removing debris from search-and-rescue dogs coming off the pile.

Lists of additional medical supplies were called for, as the veterinarians began decontaminating and treating the dogs for dehydration and injuries. As days passed, additional volunteers and extended outdoor facilities would be needed adjacent to the MASH unit. To accommodate the volume of dogs in need of care, along with pallets of food and supplies that would continue to arrive by truck, tents for weather protection and large tables were set up. Indoor space was saved for dogs needing cage rest or holding for transfer to a critical care facility. Over the days and weeks following, additional veterinary volunteers arrived bringing new skills and equipment. The MASH unit was enhanced with an on-site lab and outdoor showers for cleansing the dogs.

In addition to caring for SAR and therapy dogs who came to Ground Zero, the SCSPCA and veterinary volunteers provided a steady oasis of camaraderie and emotional support for many heroic men and women, grateful for the love and professional care shown to their K9 partners.

A lost and found log turned the MASH unit into a safe haven for pets and other animals found injured or abandoned. An injured pigeon was nurtured, a Persian cat found on a roof was held safe, and four toy poodles who were evacuated from an empty apartment were brought to the site. The poodles were transferred uptown by the Kalvig and Shorter team and were safely cared for at their practice until their owners could be found.

After the first three days at Ground Zero, Kalvig and Shorter’s team returned to their practice, which became a center of communications and logistical support for the veterinary operations at the MASH unit. A whirlwind of phone calls, post-it notes, faxing, lists, updates, debriefings, fulfilling requests and directing supplies became the new normal for their busy team—in addition to the regular daily operations of their hospital. Protocols were reviewed with new volunteers and regular adjustments were made for weather, security access and supply needs. Incoming calls from around the country were answered, with information on donations, food, and supplies. Their team communicated multiple times a day with SCSPCA Chief Roy Gross, Chief of Detectives Gerry Lauber and veterinarian Dr. John Charos, who together coordinated operations with others on site. Dr. Kalvig and staff, along with Dr. Mitch Kornet of Long Island Veterinary Medical Association, kept volunteer shifts filled so there was never a  lapse in 24-hour veterinary care at Ground Zero. This work continued as long as it was needed, into November. Over that time, approximately 350 dogs were cared for at the MASH unit by more than 200 private veterinarians and technicians, alongside VMAT volunteers.

We salute our neighbors, Drs. Barbara Kalvig and James Shorter, for their initiative and for compassionately offering their skills to help our city during a time of extreme disaster. And this didn’t stop at 9/11. Due to the success of the veterinary response at Ground Zero, representatives of the NYC Office of Emergency Management (OEM) requested ongoing assistance for future animal-related emergencies during times of city-wide disaster. With their 9/11 colleagues, Kalvig and Shorter formed the NYC Veterinary Emergency Response Team, a 501(c)3 organization and alliance member of the Animal Planning Task Force of NYC Emergency Management. NYCVERT played a role in the evolution of New York City’s animal-related disaster response plan, elements of which were put into action during Hurricane Irene and Superstorm Sandy. This work is an integral part of who Kalvig and Shorter are. During the early days of the COVID pandemic, while their practice provided essential veterinary services to our community, they raised funds and donated many cartons of PPE in response to calls from local healthcare workers seeking help when NYC was suddenly the epicenter of the pandemic.