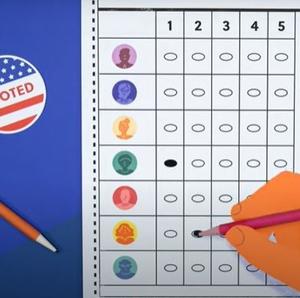 Starting in 2021, Ranked Choice Voting will be used to elect candidates in New York City. NYC will use RCV in primary and special elections for local offices including Mayor, Public Advocate, Comptroller, Borough President, and City Council. For Murray Hill residents, the first election that will use ranked choice voting will be the primary election in June. Voters will have to learn how to vote using RCV, and they will also have to know about all of the candidates to make the most of this voting method.

RECOMMENDED: Before every election, visit the NYC Board of Elections website to check your voter registration status and your polling places for early voting and general elections. Polling places may be different from past elections, and early voting may take place at different polling sites than the general election. In addition, you can generate a sample ballot. Begin with the Am I Registered? link vote.nyc/page/am-i-registered.  The sample ballot will show all of the candidates in your district. It will also show ballot propositions, if there are any. Please be aware that information about early voting poll sites and the sample ballot may not be posted on the BOE website until just before the elections.

How do I fill out the ballot?

If the ballot has Federal and State candidates, they will be in a single-choice voting section. You will only choose one candidate for each office.

Example: Five candidates are running for a NYC office.

Completely fill in the oval in blue or black ink in the desired ranking column.

Don’t make any stray marks on the ballot.

You don’t have to mark all five rankings, but the candidates you prefer are more likely to win if you do.

Invalid ballot entries—What not to do

This is not correct: Indicate just one ranking for each of your five preferred candidates.

This is not correct: Don’t use the same ranking for more than one candidate.

If you are voting in person, invalid ballot entries will be rejected and you will have a chance to submit a corrected ballot. If you are mailing in your ballot, you will not be able to correct an invalid ballot.

How are my votes counted?

Counting the votes for Ranked Choice Voting is done in rounds.

If a candidate gets more than 50% of the first-choice votes, that candidate wins the election.

If no candidate gets more than 50% of first-choice votes, then another round of vote counting will be done.

If a candidate gets more than 50% of the votes, that candidate wins.

This process continues until a candidate has more than 50% of the votes, or when there are only two candidates left. The candidate with the most votes wins!

Why is NYC changing to Ranked Choice Voting?

Ranked Choice Voting gives voters more say in who gets elected. Even if your first-choice candidate doesn’t win, your 2nd, 3rd, 4th, and 5th choices can affect the outcome of the election.

Cities that have implemented Ranked Choice Voting have elected officials that are more representative of their communities.

We get results in one election; there will be no delays for runoff elections. Having one election saves money.

Some background information about NYC elections.

There are two city agencies that are involved with NYC elections:

NYC Campaign Finance Board (nyccfb.info) is a non-partisan agency that handles public financing for candidates, provides general information about voting, candidates and campaigns for voters and candidates, and gets out the vote. The Voter Guide with the list of candidates and their biographies is available at nyccfb.info/nyc-votes/vgwelcome.

Voter Guide with information about the candidates nyccfb.info/nyc-votes/vgwelcome.