Asian Restaurants, Minus the Flight 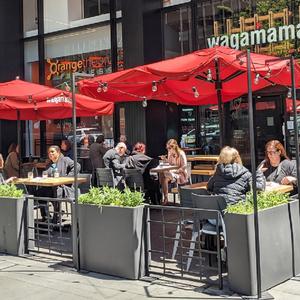 Chinatown may still be reeling from the pandemic, as The Times put it recently, with the loss of at least 17 restaurants and 139 ground-floor stores, but in Murray Hill it feels as if the number of Asian enterprises is, if anything, growing. “We are going to expand Cafe China in July and move it to a new spot on 37th Street,” says Xian Zhang, one half of the power couple behind Cafe China, who are clearly grateful that their restaurant made it through—albeit at a slower pace than when it was so packed with out-of-area visitors, locals couldn’t get a foot in the door, much less a table for two.

Despite the ballyhooed retreat of tourists and office workers, Murray Hill, coupled with streets extending west into the Garment District and south toward NoMad, remain something of an Asian food festival. Yes, in these volatile times one must google for openings and closings, changed hours, conditions and even locations; some restaurants are flight up. In March, Cafe China, on 37th, was not alone: there were Zest Szechuan and Best Sichuan, on West 39th; Maine Noodle House, just below 39th on Sixth Avenue (facing a branch of the Taiwanese fast-food chain I’ Milky); Evergreen and Da Tang on 38th; and Dim Sum Palace, on 33rd. Moving east, Hunan Village, Dun Huang and Lanzhou Noddle are clustered on Lexington Avenue; PF Chang’s is on 41st; Little Alley and Mazu, on Third Avenue; and New Moon and Profit, on Second.

Now meet Little Japan: MakiMaki, Momosan Ramen & Sake, and Wokuni form another mini restaurant row on Lexington. Kajitsu, Sushi Ryusei and Tempura Matsui are scattered along 39th; Tonchin and Tenho Ramen are on 36th; Ginza Sushi is on 35th; Chirashi Sushi, on 32nd; Akura Sushi, on 31st; and Hiroshi Sushi and Wagamama are on Third Avenue. All this on top of the gaggle of authentic Japanese restos just north of Murray Hill, within striking distance of the UN.

Then there are our Thai neighbors: Sabai, on Park Avenue; Tam Sang, on Lexington; BBK Eatery, on 34th; One Two Thai, on 33rd; and Lan Larb, on Second Avenue. For Vietnamese fare, there’s the Pho 5, on Third. And for Asian-fusion, Franchia is on Park and Sashi Asian Bistro, on Second, with Spice Symphony (Chinese-Indian) and Asian Hong Kong (Chinese-Japanese), in between, on Lexington.

For those who would rather prepare their own meals à la Japonaise, Sunrise Market, on 41st, has what it takes: sukiyaki beef and Berkshire pork belly, shabu-shabu sets, glistening fish fillets, fresh shiitakes and greens, frozen gyoza and mochi, not to mention Japanese ale and rice in bulk. Japanese housewares—from iron tea pots, wooden rice paddles and razor-sharp knifes to makeup and massage sandals—are a flight up, and there's a small affiliated restaurant next door. Provisions and prepared meals to-go can also be found at Katagiri, also on 41st.

Midtown’s Asian bent could be a reflection of its sizable Asian population (about 20 percent of those living in zip code 10016, Census data suggests). Or maybe the food just tastes good—and everyone in the neighborhood knows it.

“On the first day of outdoor dining, I met three people who had been there the first day we opened, in 2011,” says Cafe China’s Yiming Wang. “That was a good feeling, because they were all three from around here.”