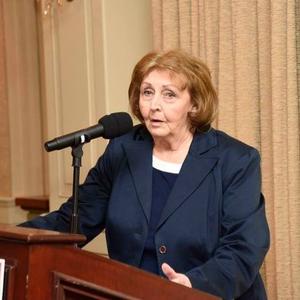 The Murray Hill Neighborhood Association marks the passing of Hazel Cathers on December 15, 2020. She was 81 years old.

Born and raised in Birmingham, England, Cathers had a remarkable career spanning 60 years of dedication to the military. For 49 years she was with the United Service Organizations (USO) of Metropolitan New York, ending up as Executive Director. She left the USO in 2008 to become Executive Director of the Soldiers’, Sailors’, Marines’, Coast Guard & Airmen’s Club in Murray Hill. These nonprofit organizations host active members of the military, their families, and veterans, providing social activities, programs and accommodations. She was deeply committed to people of the military and loved by them in return. These dedications posted on her obituary at dignitymemorial.com tell it all: “She was the real deal. Her work was never about a paycheck but rather about doing the right thing for so many. The laughs we had over the years will stay with me forever.”

“You were a pillar for the Military Community and never ceased giving your utmost ‘til success was met. Thank you for making the light shine bright at SSMAC.”

“She led by example through her strong work ethic, humility and willingness to serve others, especially our military community.”

“Hazel M. Cathers is truly the epitome of the adage, ‘Keep Calm and Carry On’.” Hazel touched the lives of many with a heart of epic proportions. To me, she was a mother figure, a mentor and a friend.”

Donations in her memory can be sent to the SSMAClub, 283 Lexington Avenue, New York, NY 10016, or ssmaclub.org.