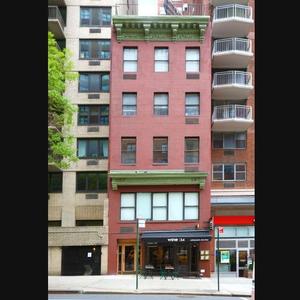 Murray Hill Neighbors’ Stories is an initiative started by The Murray Hill Neighborhood Association’s Preservation & Design Committee. It debuted in January. Four stories were shared in Eblasts from January through May of this year. This initiative serendipitously coincides with our new President's message of unity, and we hope you will enjoy and participate.

Included here is another story sent to us by Norman.
My name is Norman Sinowitz and I was born and raised in the Murray Hill section of Manhattan. I lived at 127 East 34th Street on the second floor rear apartment from the time I was born on July 17, 1943, until February 1962 when we moved to Woodside, Queens. My grandfather Isaac bought the stationary/confectionary store at that building in 1935 from a Mr. Alshaker. In 1938 this building was sold to him by the owner, a Mrs. Mayberry, for about $40,000. After my grandfather Isaac died in April of 1962, my father, Philip & his sister Rose, ran the store plus the building. My father and my aunt Rose sold the 127 building to Hill Realty in July of 1967. The candy store was owned by us for over 32 years.

The 127 E 34th Street building was built in 1856 as a single-family residence and is still standing and wedged between two new 1960's tall buildings. It originally had a staircase going from the sidewalk to the first floor. The servants’ quarters were in the ground floor and the basement.

Around 1910 this building was converted into multiple dwellings with 2 apartments on each of the four stories. Each apartment consisted of one large room with a marble fireplace and a smaller bedroom. Each apartment had a full bathroom. On the second floor where I lived with my parents, we broke through the wall in 1952 to add on the two rooms of the front apartment. That apartment was not under “rent control” because it was the landlord's apartment.

I am 77 years old and will be 78 on July 17, 2021. I am retired as a printer/proofreader from the Sun-Sentinel Newspaper after working there for 32 years. I live in Cooper City, Florida. When I visit NYC, I stay at the Soldiers, Sailors, Marines, Airmen's & Coast Guard Club on Lexington Ave between E. 36th & E. 37th Streets.

The elementary school I went to was PS 116 on E. 33rd Street & the Junior High School I went to was 104 Manhattan on E. 21st Street between 2nd & 1st Avenues. In 1962 I graduated from the New York HS of Printing (later called the HS of Graphic Communication Arts). I have worked in the Printing Trade on and off in both "hot-metal" typesetting and photo type.

Send Your Stories to The Preservation and Design Murray Hill Neighbors’ Stories Committee
Chair: Michaela Walsh
Pauline Brooks, Susan Demmet, Sandy Driesen, and Barbara Gieseler
MurrayHillStories@murrayhillnyc.org
We will contact you if your entry is being considered.
Please Note - MHNA does not edit or comment on the personal stories, except for spelling and punctuation.