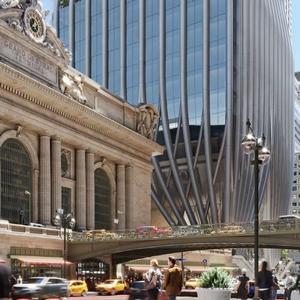 On February 23, 2021 the Landmarks Preservation Commission held a virtual hearing regarding Project Commodore, the proposed new 1,676 foot building on 175 Park Avenue that will replace the Grand Hyatt Hotel. The project did not require LPC approval because it is not in a Historic District and falls within the guidelines of East Midtown Rezoning. The developers made their presentation as a courtesy, primarily because the building will be next door to Grand Central Terminal, one of the city’s most famous landmarks.

The hearing lasted 3 hours, with the LPC acting in an advisory role. Because the building will share the block with Grand Central Terminal, the first part of the presentation addressed the harmonious relationship of the building’s appearance in relationship to Grand Central. The project, which looks to the future, is intended to revitalize the area.  It is not meant to compete with the landmarked Grand Central Terminal, but rather to compliment it. The project will incorporate public plazas and will provide more open space than what is required by the rezoning laws. The public will also get to see views of the eastern façade of Grand Central that previously were not visible.

The second part of the presentation addressed the alterations to the viaduct sidewalk and the 42nd Street passage connecting the new building to Vanderbilt Hall.

Twenty-one people gave testimony, including architects, historians, transit managers, urban planners and representatives from preservation groups. Most of those who testified gave their full support, including Dan Biederman, Executive Director of Bryant Park and the representative for The Historic District Council. A few, including the Victorian Society were vehemently opposed and felt that this enormous glass tower would minimize Grand Central. The speaker from The Municipal Art Society felt that the façade was out of scale with Grand Central, that the giant fluted columns were overwhelming, and that the building, more suitable for the supertall buildings of Dubai, would overpower Grand Central.

After the presentation and testimonies, the LPC Commissioners each gave their opinions. Of the ten commissioners, all but two supported the harmonious relationship of the new building with Grand Central Terminal, prompting a favorable report from the LPC. All of the commissioners approved the transit changes to the interior of the terminal.

The project will undergo further consideration and refinements and is expected to be completed by 2030.

For a full description of Project Commodore’s plans and to see the architectural renderings, please go to newyorkyimby.com/2020/11/1646-foot-tall-project-commodore-revealed-new-york-citys-possible-new-tallest-building-by-roof-height-in-midtown-east.html.