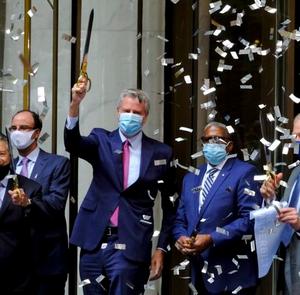 Ribbon cutting for One Vanderbilt took place on September 14, 2020. The building was designed by James von Klemperer, Kohn Pedersen Fox Associates and is located between 42nd and 43rd Street and between Madison and Vanderbilt Avenue, immediately west of Grand Central Terminal. According to developer SL Green, the majority of the building is leased to banks, private equity firms, legal practices and real estate companies. The developer took advantage of the Midtown East Rezoning, which leverages public/private partnerships. Developers can acquire bonus floors for their buildings in exchange for the inclusion of public works in their projects. Unused development rights were also transferred from the former Bowery Savings Bank, a nearby landmark building. The bonus floors added up to make One Vanderbilt the city’s fourth tallest skyscraper. SL Green invested $220 million in public works in and around Grand Central Terminal. One Vanderbilt could not open until the public improvements were complete. A new public plaza and many improvements to the MTA subway station at Grand Central were a requirement of the project, with the goal of improving circulation and accessibility. The improvements are described below.

1 Vanderbilt Plaza, where the ribbon cutting was held, is a new pedestrian plaza located where there used to be a street and narrow sidewalks along Vanderbilt Avenue between 42nd and 43rd Street. The plaza is not yet open to the public because the site hasn’t been cleared yet for public use and its safety plan is not complete.

Improved circulation at the 42nd Street-Grand Central subway station offers a 37% increase in mezzanine circulation space, new staircases between the mezzanine and platform levels of the 4, 5, and 6 subway lines, additional turnstiles and gates and a new ADA elevator at 42nd Street and Lexington Avenue. Reduction in congestion on the platforms will result in at least one additional train per hour through the station.

The reopened passageway connects the Grand Central 4/5/6 subway to a new entrance and stairway on the southeast corner of 42nd St and Lexington Avenue.

Department of City Planning (DCP) website for the project

City Planning Commission (CPC) report, an official document of the project and the improvements.