The Harmonia, and other homeless issues in these pandemic times 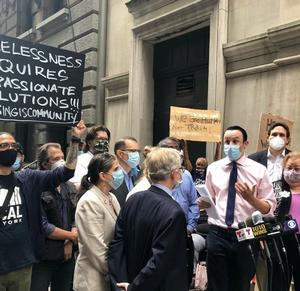 The pandemic has resulted in dislocations for many of the homeless. Since it is difficult to practice social distancing in some shelters, many homeless people moved outside to the streets. Some homeless people were moved to hotels by the City, as a temporary solution. The homeless who were accustomed to sleeping on subways also had to find other places to go, following the decision to close the subways every night for deep cleaning. The closure of public buildings meant that toilets and other facilities were no longer available during the day. The problems faced by the homeless are also having an impact on our neighborhood. Our neighbors have expressed concern about the increasing presence of the homeless on the streets.

Homeless people staying in shelters are not exempt from dislocation. The residents of the Harmonia shelter (formerly the Chandler Hotel) at 12 East 31st Street were faced with relocation in September. This shelter was established two years ago as a shelter with supportive services for adult families. Some of the residents are seniors, and some have disabilities, and The Harmonia provides appropriate facilities and services for them, as they await permanent housing. This shelter has been accepted and supported by our neighborhood.

In September, there were protests on the upper west side about homeless men who had been temporarily placed in the Lucerne Hotel, and the City was threatened with a lawsuit. The City decided to relocate those men to the Harmonia and to make space for them by moving Harmonia residents to other shelters, some of which did not have appropriate supportive facilities and services. Residents of the Harmonia, elected officials, the Murray Hill Neighborhood Association, our neighbors and other groups sent letters, had meetings and rallied to protest the moves. This time, there was a happy conclusion; the residents of the Harmonia were allowed to remain there.

The letter below is from Trish Marshik, Chief Operations Officer, Services for the UnderServed (S:US), 9/25/2020. S:US is the organization that operates the Harmonia. [with minor editing]

By now all of you know that Services for the UnderServed (S:US) was notified this month that Harmonia would be suspended in order to house another group of homeless individuals at the Chandler Hotel. This afternoon we were informed that this decision has been reversed and S:US and the families we serve will be staying where we are.

Needless to say we are overjoyed! We are also very aware of the support and advocacy all of you have brought to this situation. Thank you. Even before this occurred we have been grateful for everything you have done to make the families at Harmonia feel a part of this neighborhood for the last 2 years, and for helping to make this program the success it has been. However your efforts over the last two and a half weeks have been overwhelming. Thank you for being our astounding partners as we work to change lives for vulnerable New Yorkers.

We look forward to our ongoing work together.

Post by Mike Bonano on Nextdoor-MurrayHill 9/28/2020. (Mike Bonano is a Harmonia resident and activist.) [with minor editing]

Update on the Harmonia. So we win the case and families can stay put at the Harmonia. Unfortunately the single men at the Lucerne still have to be relocated to another building in wall street. I would love to thank all of you who wrote to the Mayor, etc. and helped out with food and clothing. Without you this would never have happened and we would have been relocated as well…

In September, Community Board 6's Housing, Homeless, & Human Rights Committee held a panel discussion on systemic solutions to our city's homelessness crisis. If you missed the event, you can find a video of it archived on the CB6 YouTube channel youtube.com/channel/UCVn0y_oPVdX0vvRFl70YAig. The panelists were Heather Frey, Assistant Vice President, Programs at Breaking Ground, Sheila P. Vakharia, Deputy Director, Department of Research and Academic Engagement at the Drug Policy Alliance, Tierra Labrada, Policy Analyst at the Supportive Housing Network of NY, Felix Guzman, Activist at VOCAL-NY, Lauren A Curatolo, Project Director at Midtown Community Court. A summary of some of the discussion points are detailed below.

Currently, the area served by Community Board 6, including Murray Hill, Kips Bay, Turtle Bay, and areas south of Kips Bay, has four shelters at East 30th Street, East 45th Street, East 53rd Street, and East 17th Street. This is slightly lower than the citywide “Fair Share” average. [Note: There is also the Harmonia on 31st Street]. There are temporary shelters at The Pod Hotel on East 39thStreet, The Marcel on East 24th Street, Vanderbilt Y on East 47th Street, and at The Hotel at Lexington and 30th Street. The 30th Street men’s shelter poses safety concerns; it has experienced crime in past years and undesirable behavior by some residents when they are in public places in the neighborhood. This facility is a primary intake center for the whole city. Sex offenders are not placed here. The facility has a clinic where the homeless can get medical screening.

Since the pandemic, the district has not seen an increase in crime, except for burglary & petty larceny. It is not clear whether the crime is attributable to the homeless or to other people in the neighborhood. There have been sanitation concerns such as lack of open restrooms, which has led to public urination and defecation. There have been some homeless encampments. The homeless are no longer handled by NYPD, and are now the responsibility of the Department for Homeless Services.

The New York City Department of Homeless Services (DHS) has informed CB6 of their plan to open a new shelter in our district in the former Renwick Hotel at 40th Street near Lexington Avenue. Unlike the temporary hotel shelter sites DHS has opened during the pandemic, this new shelter would be a permanent establishment and would house 174 adult family units.

The NYC Department of Homeless Services is not required to seek community comments when deciding on locations for homeless shelters. The NYC “fair share” policy requires that shelters are located throughout all neighborhoods and boroughs.

Other trends affecting the availability of affordable housing are also noted. New development has gentrified the neighborhood following recent rezoning, despite the requirement to contain a percentage of affordable housing. Some neighborhood rental spaces have evolved to be transient rentals and party spaces (possibly illegal). Vacated buildings, which are usually low-rise tenement buildings, provided affordable housing when they were occupied. Solutions to these issues will have to be enforcement of rental laws and policy changes at the city and state levels.

Photo: Rally in front of the Harmonia on September 11 with State Senator Liz Krueger, Council Member Keith Powers, Manhattan Borough President Gale Brewer, residents of the Harmonia and others.

The new shelter on 40th Street at the former Renwick Hotel.

[Source: Email from Community Board 6, October 23, 2020] There will be a public meeting about this on November 16. Please look for details on the MHNA website.

Here is what Community Board 6 knows as of October 22nd about the new shelter. The Department of Homeless Services has informed CB6 of their plans to open a new permanent shelter in our district at the former Renwick Hotel, 118 East 40th Street, near Lexington Avenue. This will be a shelter for 174 adult family units, such as married couples or parents with adult children. The day-to-day running of the shelter will be handled by CORE Services Group. The target date for opening the shelter is December 2020. This new shelter will be the fifth permanent homeless shelter in Community District 6. More information about the district, including boundaries, is available on our district profile page.

This location will serve and support 174 adult families experiencing homelessness as they get back on their feet. Adult families are comprised of households with children over the age of 18, and can include, for example:

Residents will not include either single adults, or adults with school-age children.

There will be comprehensive social services and 24/7 security on site. CORE will provide an array of on-site services and off-site service linkages, providing these families with the support that will help them stabilize their lives by returning to and maintaining independent living.

CORE will provide case management, employment readiness, and housing search services. In addition to these one-on-one services, CORE will provide group services and programming to help families move out of shelter and achieve long-term stability.

A secure and safe environment is critical to the success of any program facility—and DHS is committed to prioritizing the safety of clients, staff, and community members alike.

There will be a minimum of seven security staff per shift and one supervisor overseeing security staff per shift.  As an added measure, a total of 42 security cameras will be installed throughout the building and across the shelter grounds. There will also be a 24-hour open line for the community to provide feedback in a timely manner and to immediately address any concerns that may arise.

There is a 10pm curfew for the residents of this facility. Clients who may be employed with late work hours will receive passes to return to the facility after curfew based on their documented work schedule.

Once the shelter is open, CB6 and local elected officials will be represented on a Community Advisory Board (CAB) so that we can have regular meetings and open lines of communication with the Department of Homeless Services and the shelter operator. If our office, for example, gets numerous complaints about a particular kind of neighborhood disruption tied to the residents, we can bring these up at the CAB meetings and work to have them addressed. We will work to make sure that the shelter and its residents are good neighbors as well as working to make sure that the residents housed at the new shelter feel welcomed into the neighborhood.

CB6 continues to advocate for more systemic solutions to the crisis of homelessness including the development of affordable housing and supportive housing in our district and citywide. Our City is a "right to shelter" city meaning that every unhoused individual or family that seeks shelter must be given shelter. Our city faces a housing and homelessness crisis. Before COVID, there were over 60,000 unhoused New Yorkers. That number has surely gone up during the pandemic. The majority of those in the shelter system are families with children and, as mentioned above, this new site will be a shelter for adult family units.

If you see unneighborly behavior from a temporary shelter resident, permanent shelter resident, or homeless individual living on the street, please call 311. We understand that 311 can seem like a dead-end at times, but it is crucial for the City to have data on concerns submitted. If the matter is an emergency, call 911. Please remember to keep the CB6 office abreast of any issues as well so we can track them and follow up accordingly.