Hill and Bay, a Welcome Watering Hole In Trying Times 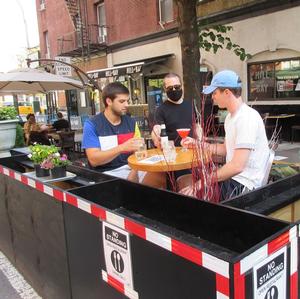 A lot of restaurants have shut down in recent months, but not Hill and Bay, a casual-chic bistro that is clinging to the corner of 32nd Street and Second Avenue like a barnacle. “It’s about community,” says the owner, Eddie Bergman, who moved to Murray Hill 19 years ago and has every intention of staying. “We’ve had the same employees for years now, and that’s one of the ways we’ve been able to make it through the Covid business—we haven’t closed for even one day.”

Regulars swoop by the pass-through window for coffee in the morning and cluster in the new outdoor space throughout the day, drawn by craft cocktails and local beers, upscale comfort food like Black Angus burgers, soy-sesame salmon salad, and grilled chicken with mashed potatoes and kale, and a brunch menu that’s good till 4 p.m.

Pre-Covid, the restaurant captured customers spilling out of the AMC cineplex right across Second Avenue. That tributary has dried up, though the river flowing out of NYU Langone’s Tisch Hospital, on First Avenue, remains steady. It was partly proximity to major health centers that led Eddie to plant a restaurant at the cusp of Kips Bay and Murray Hill, though mainly it was the area’s “vibrance and diversity, on all fronts,” he says, praising the presence of United Nations delegates and the mix of age groups and even housing (“affordable and non-affordable”).  “The idea was to have a local restaurant that celebrates our area.”

Still, the odds of survival are sobering. More than 2,800 New York City businesses have closed since March, The Times recently reported, many of them bars and restaurants, and Midtown, absent its wealth of office workers and tourists, has been particularly hard hit.

Outdoor dining has helped buoy spots like Hill and Bay, “though I’m not sure it’s sustainable come November,” Eddie points out. Also unclear is whether the federal Payroll Protection Program, which provides forgivable loans to small businesses like his, is more akin to recovery or temporary life support.

Eddie has already experienced the closing of two Hill and Bay sister restaurants, which he and his former partners phased out after a favored chef was killed by a hit-and-run driver near Union Square, in 2017.

For the one still standing, “this September will be a milestone because seven years is a long time for a restaurant to stay open,” Eddie says, adding, “It’s a lot easier to close a restaurant than to open one.”

“I have two goals,” he says. “I live in the community so I think it’s important to keep a corner active and not just shut down. And the second thing is to create jobs.”  Not at the pre-Covid level, perhaps, but with the same commitment—plus a dose of faith in the future.

Hill and Bay, 581 Second Avenue (corner of 32nd Street), 212-245-5554, offers takeout, delivery and socially distanced outdoor seating, along with a discount for members of The Murray Hill Neighborhood Association.