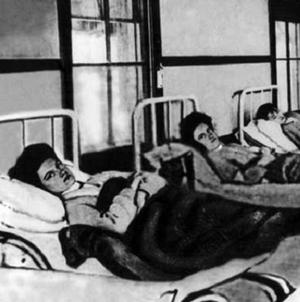 In this time of coronavirus, it is interesting to learn how New York City handled past epidemics and how approaches to public health have evolved. Published in the Bulletin of the New York Academy of Medicine, October 15, 1939, the article “The Curious Career of Typhoid Mary” by George A. Soper tells the story of Mary Mallon (1869-1938), aka Typhoid Mary, America’s first identified asymptomatic typhoid carrier. Mary was an Irish immigrant who lived on the edge of poverty, working as a cook and changing jobs often. Everywhere she worked, small outbreaks of typhoid would occur. Typhoid Mary had ties to our neighborhood, as she lived on 3rd Avenue south of 33rd Street in Kips Bay when she was not residing at her place of work.

George Soper, a civil engineer and expert in sanitation, was hired to investigate disease outbreaks. His theory that typhoid could be spread by one carrier led him to develop methods for contact tracing. He also investigated how disease was spread.

Soper first identified Mary Mallon as a possible source of a typhoid outbreak In 1907. In those days medicine did not offer many cures or vaccines, and disease outbreaks were taken very seriously. Outbreaks were reported to the NYC Health Department, and they were investigated and stopped as quickly as possible. Once identified as a typhoid carrier, Mary was arrested as a public health threat and sentenced to quarantine, where she had a nervous breakdown and sued the NYC Health Department.

Controversy regarding the balance between personal freedom vs. public health was as heated in those days as it is today. Mary Mallon was quarantined against her will. Subsequently, public health officials tried to find ways to allow her to live safely in the community without being quarantined. The NY State Health Commissioner agreed to release her if she agreed to practice diligent hand washing and to stop working as a cook. (Typhoid is a gastrointestinal disease.) She did not follow the terms of the affidavit and was again quarantined at Riverside Hospital on North Brother Island in the Bronx, and lived there until her death. Doctors at that time discovered that typhoid bacteria live on the gallstones of carriers. They offered to remove her gall bladder and release her from quarantine, but she refused the operation. Eventually Mary learned how to practice good hygiene, she was given a job in the laboratory where she was living, paid well, and allowed to leave the premises when she wanted. By the time of her death, more than 400 asymptomatic carriers of typhoid had been identified. Mary Mallon was the only one forced into quarantine.

“The Curious Career of Typhoid Mary,” by George A Soper, Bulletin of the New York Academy of Medicine, October 15, 1939, https://www.ncbi.nlm.nih.gov/pmc/articles/PMC1911442.

Sewage testing gives clues of coronavirus, May 28, 2020, thehill.com, by Reid Wilson
'The Curious Career of Typhoid Mary,' by George A Soper, Bulletin of the NY Academy of Medicine
'Typhoid Mary's tragic tale exposed the health impacts of super-spreaders' by Nina Strochlic 3/17/20
When Can NYC Place Someone Under Forced Quarantine? by David Cruz, gothamist.com, May 27, 2020
Wikipedia: Mary Mallon