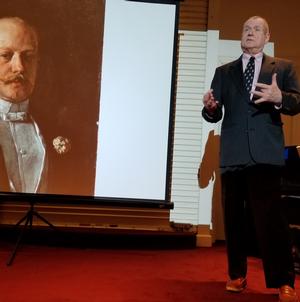 Tom Miller, blogger extraordinaire about New York City’s historic buildings and the people who lived in them, entertained and informed his audience on March 2 at the Makor Center for Spiritual Judaism with a talk, McKim, Meade & White on Murray Hill. The talk began with a short history of the Gilded Age architectural firm, McKim, Meade & White, and took a detailed look at four of the buildings they designed, as well as the building’s owners. All of these buildings are now designated as New York City Landmarks.

Three of the buildings discussed by Miller were designed by Stanford White. The Italian Renaissance revival style J. Hampden Robb House at 23 Park Avenue (35th Street) was built in 1888-92 as a private residence. In 1923 the building was purchased by The Advertising Club of New York. It was sold to a developer in 1977 and converted to a co-op apartment building. The Thomas B. Clarke House at 22 East 35th Street was built in 1902. Clarke was a renowned collector and dealer in fine and decorative arts, and the 35th Street townhouse was transformed into a gallery. The building was purchased by the Collectors Club in 1937. The 1905 Tiffany Building at 401 Fifth Avenue (37th Street) was the Tiffany and Company headquarters until Tiffany moved to 57th Street in 1940. The building now has retail at the street level with offices above.

The grand Classical Revival building at 225 Madison Avenue (36th Street), designed by Charles McKim, was built in 1906 to house the private library and art collection of J. P. Morgan. In 1924, it became a public institution, The Morgan Library & Museum (formerly the Pierpont Morgan Library).

This event was hosted by The Makor Center and organized by The Murray Hill Neighborhood Association’s Preservation & Design Committee. Stein Berre and Britt Smith sponsored the reception following the talk.