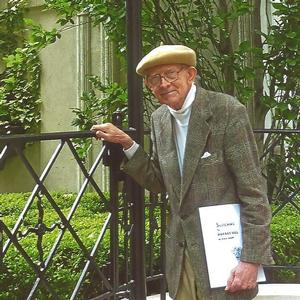 Minor Lamphier Bishop, age 92, passed away during the early morning hours of 20 June 2019. Minor is best known by those of us who live in Murray Hill for his community service, having served the MHNA for decades with great dedication, from the 1960s until the end of his life, as a trustee and active member of the Preservation & Design Committee. He worked to preserve the historic designation of the Murray Hill district, and researched the history of its landmarks and buildings. He is best remembered for his walking tours, which he gave tirelessly.

Minor was a visionary about urban amenities. He drew up a proposal for a waterfront restaurant and park in Murray Hill on the site of the old Con Edison plant at 35th Street and 1st Avenue. Twenty years later his vision has become a reality.

Minor Bishop began ” building houses” when he was five years old. Growing up in Teaneck, N.J., he made cardboard models of nearby houses. His grandfather, who was an architect as well as a church organist, inspected one of Minor’s creations. “You need to move the plumbing,” he said. “But otherwise it’s pretty good.” As a child, Minor developed plans for a car company called Empire Motors. He designed and refined the model prototypes, developed a business plan and drew minutely detailed advertising brochures. He pursued this passion into his early 20s. But he set those ambitions aside when he joined the military during WWII.

Upon returning home, he worked his way through the Yale School of Architecture, earning his degree in 1953. One of his treasured memories was designing a church with his grandfather which was built in Northampton, Massachusetts and still stands. He went on to work at Delano and Aldrich, an elite architectural firm, and following the 1960 death of William Delano, Minor embarked on a 30-year career working with Delano’s nephew, Alexander McIlvaine, in a brownstone on 36th Street. He lived and worked in his beloved neighborhood of Murray Hill, designing buildings in New York, Connecticut, Maine, and the Caribbean, including the resort in Bermuda known as “The Reefs.” This resort was one of the few which remained standing when most other buildings on the island were destroyed by Hurricane Sandy. He later developed his own practice, specializing in houses from the 1880’s, which he bought, renovated and sold. He worked with prominent families like that of Preston Bush, father of President George W. Bush, Jane Pauley, and Charles Howard, owner of the famous racehorse Seabiscuit, among others. Minor had a passion for creating and he took his sketchbook with him on his daily outings. He put together a book of his sketches titled Sketching on Murray Hill which he was proud to autograph in order to encourage appreciation for the district. He authored two other books on architecture, Architectural Renderings: By Winners of the Birch Burdett Long Memorial Prize, and Fountains in Contemporary Architecture.

He was an active member in the Fine Arts Federation, the Architectural League of New York, the American Institute of Architects and, as an enthusiastic hiker, the Appalachian Mountain Club.

He developed a genuine fondness for everyone he came in contact with, and he truly cared about the environment. He retained a sharp and active mind and continued working on projects up to the time of his passing. He possessed a rascal’s charm, had many friends, and will be deeply missed, but not forgotten.

Minor Bishop’s video and book, Sketching on Murray Hill are both available for purchase on the MHNA website.

About the sketch: “Nobody Taking Away My Stoop” recalls the city’s proposal to widen the streets leading in and out of the Midtown Tunnel, which would have meant removing the stoops of the townhouses on 36th  and 37th Streets. This led to the formation of the Murray Hill Committee, predecessor to the MHNA, which was formed as a neighborhood activist group to protest the removal of the stoops.