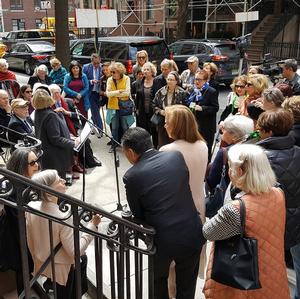 Eleanor and Franklin Roosevelt, Charles Dana Gibson, and Jessica Tandy and Hume Cronyn were honored in April in ceremonies unveiling cultural medallions placed on the façades of each of the brownstones where they once resided in Murray Hill. Barbaralee Diamonstein-Spielvogel, founder of the Historic Landmarks Preservation Center, which sponsors the Cultural Medallion Program, presided over each ceremony. She gave an overview of the historical significance of each of these famous people and introduced the esteemed speakers invited to attend because of their knowledge of or relationship to these distinguished families.

The first ceremony was held on Tuesday, April 24th on the steps of 125 East 36th Street. Eleanor and Franklin Roosevelt lived here when they were first married, after returning from their honeymoon, and their first two children were born here. Franklin Roosevelt's notable achievements were accomplished as President of the United States from 1932-1945, as he led the country through the Great Depression and World War II. Eleanor Roosevelt was a political figure, diplomat and activist for human rights. Due to the fine weather, many members of the public were able to join in the celebration. Following the ceremony, the current owners, Yoshiki Shimada and Katharine Cullison, held a lovely reception for guests inside their home.

Photo of Eleanor and Franklin Roosevelt with their first two children. Wednesday, April 25th was a rainy day, and the unveiling ceremony for Charles Dana Gibson was held inside the home of Ed and Thayer Hochberg at 111 East 35th Street. This ceremony was followed by the ceremony for Jessica Tandy and Hume Cronyn inside the home of Therese Doherty and Scott Hershman at 113 East 35th Street, which is right next door to the previous ceremony. A reception celebrating both medallion honorees was held at the Doherty/Hershman home following the medallion dedications. Charles Dana Gibson, a renowned illustrator, was famous for his creation of the “Gibson Girls.” Speakers at his ceremony included Dennis Dittrich, illustrator and past President, Society of Illustrators, Professor Martha Patterson, McKendree University in Illinois and Sarah Gibson Wiley, great-grand-daughter of Charles Dana Gibson.Each speaker provided valuable insights into the early life of Gibson as well as the development of his artistic talent.

Photos: Charles Dana Gibson and a drawing of a 'Gibson Girl' Both Jessica Tandy and Hume Cronyn were well into their theatrical careers during the time they lived in Murray Hill. Jessica Tandy was busy starring in A Streetcar Named Desire in the late 1940’s and Hume Cronyn was also involved with several theatrical productions. The couple performed together in The Gin Game and Foxfire. Speakers at their ceremony included Milly Barranger, Professor Emerita, University of North Carolina, Jacqueline Z. Davis, Executive Director, New York Public Library for the Performing Arts at Lincoln Center and Tandy Cronyn, actress and daughter of Tandy and Cronyn. Tandy spoke about how much the family enjoyed living in the house.

All of the cultural medallion ceremonies including the speakers and the unveilings were videotaped by the HLPC, thus providing a permanent historical record of each event. The Murray Hill Neighborhood Association Preservation & Design Committee co-sponsored the medallions and events.

To commemorate other illustrious residents who once lived in Murray Hill, the P&D Committee is exploring several names to add to our list of cultural medallion honorees. These include the songwriter, Cole Porter, the architect Marcel Breuer, the playwright Tennessee Williams and the actress Helen Hayes.

Funding for the research, fabrication of the medallions and the videotaping of the ceremonies comes from individual sponsors, honored building owners and private donations. If you would like to sponsor or contribute to the Medallion Program, please visit our website at www.murrayhillnyc.org and click Donate. Email Susan Demmet at sldemmet@gmail.com when you donate so your contribution can be properly acknowledged, or if you know of a significant person who lived in Murray Hill whom you believe should be nominated for a Cultural Medallion.