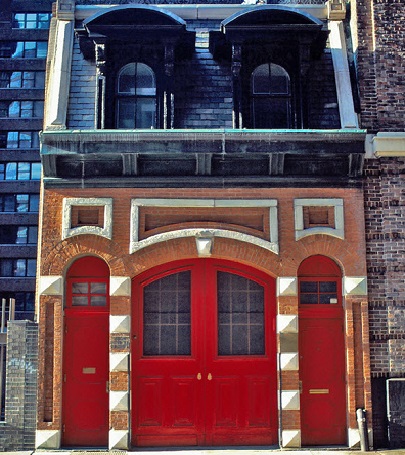 Built in 1871 as a private stable for Jonathan W. Allen, a Broker, designed by Charles Hadden. Designated a NYC Landmark in 1997.

This unusual two-story Second Empire building with a combination of styles and details including a slate mansard roof, pedimented dormer windows and incised brick panels creating a lively facade for the stable. Located near Mr. Allen's home, it was useful for keeping horses convenient, but not too near. The building is a rare surviving stable, a reminder of New York's history, when horses played a vital part in daily life and their care and housing was essential. The building now houses the Ritzy Canine Carriage House, a daycare facility for pets.

Built in 1892 for J. Hampden Robb, Attorney and Parks Commissioner, and Cornelia Van Rensselaer Robb, this Italian Renaissance mansion was designated a NYC Landmark in 1998.

The five story mansion designed by architect, Stanford White, is faced in Roman iron-spot brick with terra-cotta trim. There is an enormous double story entrance portico, the lower with Doric columns and the upper with Ionic columns along with second story wrought iron balconies, console brackets and wreaths, arched pediment and other decorative stone work The facade on the 35th Street side features a double-story bay window. The building was once the home of the New York City Advertising Club and is now a residential co-op. Built in 1852 for Isaac Newton Phelps, Banker and Real Estate, enlarged by R. H. Robertson in 1888, this Italianate style mansion was landmarked in the late 1960s. Landmark status was overturned in the 1970's, and it was reinstated as a New York City landmark in 2002.

One of the earliest and largest freestanding mansions in Murray Hill, J. P. Morgan purchased this elaborate mansion from Mr. Phelps for his son, J. P. Jr., in 1904, where he lived until his death in 1943. It was owned by the United Lutheran Church, ruled exempt from landmark status in the 1970s and slated for destruction. A sudden economic downturn halted the redevelopment plan and the mansion was purchased by the Pierpont Morgan Library in 1988. It is now part of the Morgan Museum and Library housing private spaces, offices and the Museum's gift shop.