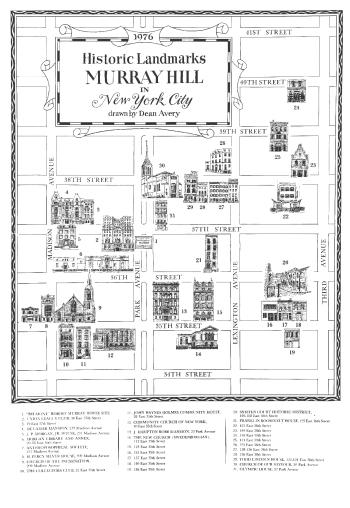 The Association has just been able to reissue this exclusive map by Dean Avery, created in 1976 in commemoration of Murray Hill's designation as an “Official Bicentennial District,” celebrating the 200 years since the American Revolution.

Mrs. Mary Lindley Murray and her daughters entertained British General Howe and his troops for tea, while General Putnam and his American troops moved northward. The Murray Home, Belmont, was located at Park Avenue and 37th Street, on their farm known as Inclenberg.

A bronze plaque honoring Mary Lindley Murray, placed by the Daughters of the American Revolution, is embedded in a boulder in the mall at Park Avenue and 37th Street.

This exclusive black-and-white map is 25 1/2 x 17 ¾ inches. Many of the individual buildings shown on this map are also available for purchase at $20 each.

All proceeds from the sale of these maps are dedicated to historic preservation in our community.

The prices shown are retail prices. Please logon to see pricing for your buyer group.