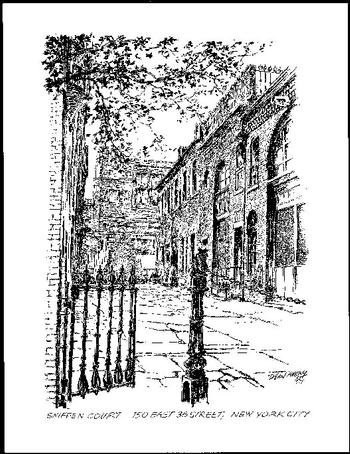 These ten brick stables were build in the 1850s by a local builder John Sniffen in the early Romanesque Revival style. Converted in the 1920s into townhouses, with a studio at the south end and a small theater, The Amateur Comedy Club, on the north end. Horses once watered at the hand pump in front of the rear wall at the far end of the flagstone-paved alley, which is adorned with handsome plaques of Greek horsemen by the sculptress Malvina Hoffman, who maintained her studio there during the 1920s and '30s.

Artwork by Dean Avery, courtesy of the estate of Dean Avery.

The prices shown are retail prices. Please logon to see pricing for your buyer group.