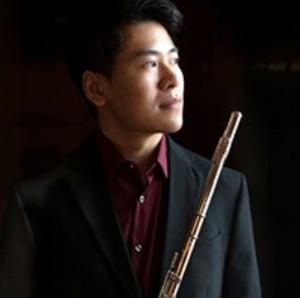 Concerto No. 2 for Flute and Orchestra by W. A. Mozart

Fantasie on the themes from "Der Freischutz" by Paul Taffanel, Voice by Toru Takemitsu

Sonata for Violin and Piano (arr. for flute) by Gabriel Faure

A native of Hong Kong, flutist Chris Wong has given performances throughout Asia, North America and Europe. A passionate soloist, Wong has experience from giving solo recitals in small school venues to performing in the Kodak Theater with the Eastman Orchestra as the winner of the Eastman School of Music Triennial Flute Concerto Competition. In addition, Wong is the first prize winner of the Tallon Perkes Memorial Flute Competition at Eastman, and prize winner of the Jefferson Symphony International Young Artist Competition and the Serge & Olga Koussevitzky Young Artist Award.

As an active orchestral musician, Wong has performed with the New York Philharmonic, New York String Orchestra, The Juilliard Symphony, among others. He has participated in festivals such as Orford Music, Hamamatsu International Wind Instrument Academy and Festival, etc. And has appeared in masterclasses with Julien Beaudiment, Shigenori Kudo, Ian Clarke and Marina Piccinini.

Wong is currently pursuing his Master of Music degree at The Juilliard School under the tutelage of Robert Langevin, and is a proud recipient of a Kovner Fellowship. Prior to Juilliard, he graduated from the Interlochen Arts Academy in 2014 with a Music Award in Flute Performance, and the Eastman School of Music in 2018 with high distinction, along with the prestigious Performer’s Certificate. His teachers include Bonita Boyd, Nancy Stagnitta and Brian Chan.

Brian Man-ho Wong just earned his Master of Music degree in Piano Accompanying and Chamber Music at the Eastman School of Music under the tutelage of Dr. Jean Barr. Brian has been inspired by professional musicians who have shaped this collaborative piano field, such as Anne Epperson, Kevin Murphy, Alan Smith, Eric Weimer, Howard Lubin, Julian Jacobson and Benjamin Zander.

A graduate of the Chinese University of Hong Kong, he studied piano and fortepiano with Dr. Mary Mei-loc Wu and Ms. Constanze Lee. Besides holding a LTCL Diploma, Brian was awarded the Brown Loranger Fellowship at LA SongFest. In recognition of his performance in music, Brian was awarded the Jean Barr Scholarship, Ruth and Arno Drucker Scholarship and Hong Kong Scholarship for Excellence Scheme to fully support his studies at Eastman. He will continue his studies at the Juilliard School.

Aside from his role as a pianist, Brian has been selected as an Arts Leadership Certificate student at Eastman School of Music. He was awarded the title Hong Kong Scholar” by the HKSAR Government in 2017.

This concert is made possible by Members of the Musicians Club of New York.

Reception with coffee/tea and Danish cookies before the concert.

FREE and open to the public.

To RSVP email rsvp@musiciansclubofny.org with your name and the number of seats you wish to reserve – you should receive a confirmation within 24 hours.