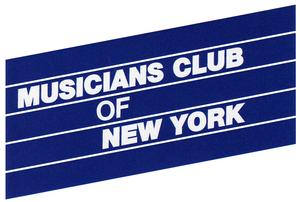 Reception at 3pm with coffee and cookies. Music at 3:30pm.

This concert is made possible by Members of the Musicians Club of New York.

Admired for his “suppleness and beauty of tone” (Allan Kozinn, Portland Press Herald) Bixby Kennedy is one of the most versatile clarinetists of his generation. He has performed concerti with the Minnesota Orchestra, Houston Symphony, Bloomington Sinfonietta, and Indiana University Symphony. As a chamber musician, Bixby has performed throughout the US and Europe in venues including Carnegie Hall, Alice Tully Hall, The Kennedy Center, Marlboro Music Festival, Music from Angel Fire, and Caramoor. He is the clarinetist for the “explosive” New York City based chamber ensemble Frisson. As an orchestral musician, Bixby currently holds titles as the Associate Principal Clarinetist of the New Haven Symphony Orchestra and Albany Symphony, and is the Principal Clarinetist of Symphony in C. He has appeared as a guest artist with the Saint Paul Chamber Orchestra and Orpheus Chamber Orchestra. He is a former member of Ensemble Connect and works as a teaching artist throughout New York City. He loves traveling, trying new foods, laughing, hiking, and playing tennis.

Pianist Mika Sasaki is an imaginative and versatile soloist, chamber musician, and educator whose performances and teaching have taken her to the U.K., Italy, Japan, Switzerland, and throughout the U.S. Her debut album, Obsidian: Mika Sasaki plays Clara Schumann, released on Yarlung Records in 2016, was highly acclaimed by the Online Merker as “illuminat[ing] the artistic inspiration and creative exchange between three Romantic souls,” Clara Schumann, Robert Schumann, and Johannes Brahms. Her playing has been broadcasted on WQXR, WFMT, KQAC, and Radio Sweden, and she has performed concertos with the Sinfonia of Cambridge (U.K.), New Jersey Symphony Orchestra, 92Y Orchestra, and more recently with the InterSchool Symphony Orchestra of New York. Festival appearances include Music@Menlo, Tanglewood, Chigiana, pianoSonoma, Taos, Yellow Barn, Aspen, Focus!, Icicle Creek, Rushmore, Mannes Beethoven Institute, Caramoor, Shandelee, Weekend of Chamber Music, and Summer Performing Arts with Juilliard in Geneva, Switzerland. She is the pianist of Ensemble Mélange and frequently concertizes with the Chameleon Arts Ensemble in Boston, the Manhattan Chamber Players, Carnegie Hall’s Ensemble Connect, and with her duo partners. She is an alumna of the Peabody Conservatory (B.M., M.M.), The Juilliard School (D.M.A.), and Ensemble Connect—a two-year fellowship program of Carnegie Hall, Juilliard, and the Weill Institute, in partnership with the NYC Department of Education.

Based in New York City, Dr. Sasaki is a faculty member at Juilliard, where she teaches piano and keyboard skills courses in the Evening Division, and Piano Topics and keyboard skills for pianists in the College Division. For more information go to www.mikasasaki.com.

FREE and open to the public (suggested contribution $10)

RSVP to rsvp@musiciansclubofny.org with your name and the number of seats you wish to reserve – you should receive a confirmation within 24 hours.