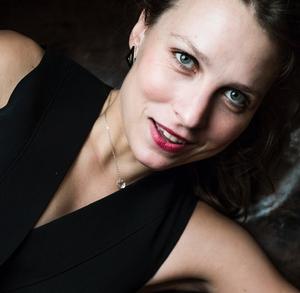 From 3-3:30pm there will be a coffee & cookie reception in the Victor Borge Hall lobby.

Fantasy in B minor, Op.28 by A. Scriabin

3 Danzas Argentinas, Op.2, II and III by A. Ginastera

Her concert engagements in Norway include recitals and annual weeks of lunchtime concerts at the Edvard Grieg home/museum in Bergen (2014–2019), Oslo University Aula, Stavanger Cathedral, Lofoten Cathedral, Kabuso Concert Hall, opening concert during the Grieg Jubilee (2007), and regular concerts for the Bergen Chamber Music Society and the Grieg in Bergen International Series with solo and chamber music recitals (since 2010). She has performed concertos with the Sinfonietta of Athens and been invited twice to perform with the Norwegian-Polish Youth Orchestra.

In April 2016, her debut CD “Khoreia” was released in collaboration with the Italian pianist Giulio Potenza (Volt & Potenza Duo) for the label Velut Luna. Des Hutchinson at Musicweb-international.com, May 2017: “I felt cosseted and highly entertained in their hands, not only with playing of the surest unison and harmony, but with the palpable joy and fun of their music-making…” Her solo CD “ Firebird” has been released in January 2019 with reviews such as, “Hats off to Oda Voltersvik for such a well-considered programme for her debut recording as a solo pianist...a most auspicious start to a recording career that promises much for the future - and already delivers generously here.“ Martin Anderson, klassiskmusikk.com review.

She is a First Prize winner of the Buono & Bradshaw International competition with a performance in Carnegie Hall, May 2017. In 2016, Oda was a finalist in the Jaques Samuels Intercollegiate Competition in Wigmore Hall, London.

Oda is also project leader of the Volt Ensemble and the artistic director of the concert series Music in Movement (currently MiM7). For her concert tours she has several times been awarded funding by the Norwegian Arts Council, Music Norway, Fund for Norwegian performing artists and Bergen Municipality.

She holds a Master in Performance from the Royal College of Music and an Artist Diploma from Trinity Laban Conservatoire for Music and Dance with distinction from the Intercollegiate Jury. Oda has participated in the Oxford Philharmonic Orchestra` s Piano Festival and Summer Academy (2006-2014), where she has played for renowned musicians such as Menahem Pressler, Marios Papadopoulos, Gary Graffman and Vladimir Krainev. From 2005 to 2008, Oda was selected for the Young Musicians Talent Programme at the Grieg Academy, University of Bergen.

FREE and open to the public (Suggested donation $10).